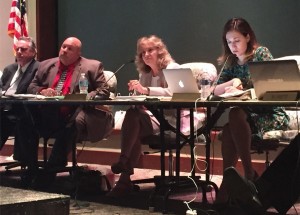 The State Board of Education meets Tuesday for its monthly meeting. It will approve the A-F grades for schools for the year. (photo credit: Claire McInerny/StateImpact Indiana)

State officials will approve 2015-16 school A-F grades Tuesday when the Indiana State Board of Education meets for its last meeting of the year .

As of right now, A-F scores are mostly calculated based on ISTEP+ scores, which, for the second year in a row, dropped.

During the 2015-16 school year, 52 percent of students passed both the English language arts and math portions of the test — a one percentage point drop from the year prior.

The 2015-16 school year was the second year of an updated version of ISTEP+, and the first year with the education company Pearson administering the test. In 2014-15, when the test was brand new, the education board voted to hold schools harmless for their A-F grades. That meant schools’ scores wouldn’t drop if they performed lower than they did in 2013-14.

Superintendents from around the state asked the board at its November meeting for a hold harmless provision again this year, but the board said that isn’t possible due to federal requirements.

We will have a full database of A-F scores posted tomorrow.