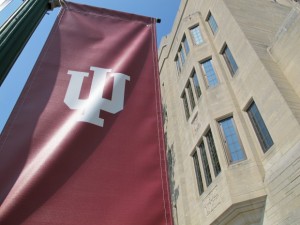 Students at Indiana University and the University of Notre Dame are appealing to administration, asking to make the schools a sanctuary campus for undocumented students. (photo credit: Kyle Stokes/StateImpact Indiana)

After the election of president-elect Donald Trump in November, college students around the state began asking their universities to become “sanctuary campuses.” This means university officials would not comply with immigration officials when it came to deportations or raids.

A week after the election, students at the University of Notre Dame staged a walk-out and protest calling for the sanctuary status at the school.

WNDU in South Bend reported on other demands in a petitions signed by students and faculty:

1. Declare Notre Dame to be a sanctuary campus that will actively refuse to comply with immigration authorities regarding deportations or raids.

2. Guarantee student privacy by refusing to release information regarding the immigration status of our students and community members to any government agency.

4. Assure that all students receive a campus, classroom and community experience free of hostilities, aggressions and bullying regarding immigration status. Communicate unequivocally and repeatedly that undocumented students are full members of the Notre Dame community who will be protected to the fullest power of the administration.

5. In line with the Catholic tradition of providing sanctuary to the persecuted, identify particular spaces on campus where those who feel threatened can seek refuge and protection.

Robel met with the UndocuHoosiers Alliance on Nov. 28 after they delivered demands on Nov. 16 to her and IU President Michael McRobbie to meet with them and discuss how they will support undocumented students when Donald Trump takes office.

Robel said she thinks the possibility of opposing immigration officials being able to execute immigration law on the IU campus is an unwise step for a number of reasons because of her concern for IU students.