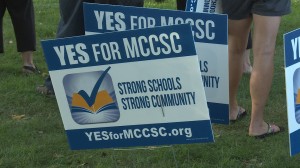 Voters around the state will see questions at the bottom of their ballot asking for an increase to property taxes to fund local schools. Ballot referenda have become more and more popular in the last decade as funding streams for schools changed.

School referendum questions became a common ballot measure in Indiana back in 2008, after the legislature voted to enact property tax caps. The caps were written into the state constitution, and the amendment says the government may not collect taxes equaling more than one percent of an owner occupied residence, two percent for other residential properties and three percent for all other properties.

Monroe County School Corporation is posing a referendum, and as WFIU reports it would continue to fund the district, which was receiving property taxes after a 2010 referendum.

MCCSC school board member David Sabbagh says the new rate is less than what was asked for in 2010.

“The rate we’re asking is a little less than we did last time. We have referendum money coming on now. We are not asking for an increase. It’s just a continuation. Actually, a little less,” Sabbagh says.

In previous years, referenda have a better chance of passing during May primaries, because it can often be one of the more notable parts of a ballot. So during an election like this, with huge races at the local, state and federal level, it could end up that more people will be voting but not be aware of what the school referenda are asking, and then vote no to raising taxes.

Read our full list of school referenda around the state, including what the money will be used for. You can also calculate how much your tax rate would go up if passed.