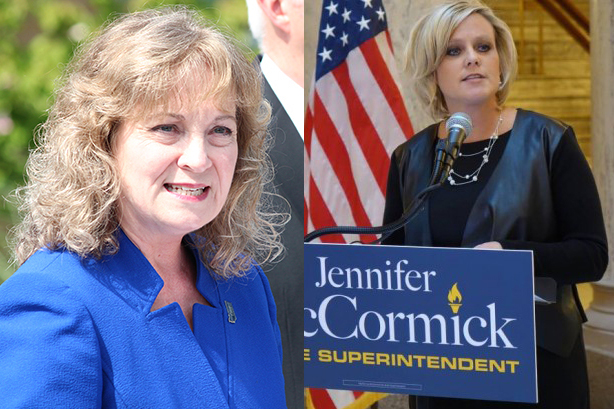 On Election Day, past the presidential race on your ballot, past the governor, Indiana voters will decide Indiana’s top education official.

On policy, they’re pretty parallel, which was clear during mid-October’s superintendent debate. They share similar ideas on the state’s school ranking system, which currently labels schools A-F: they want rankings to say more.

“Our schools are more than a test score,” Ritz says.

And from McCormick, it’s a similar response.

And on who should create the state’s teacher evaluations?

“I am very much a local control person,” Ritz says.

McCormick is, as well.

“I too, agree the power of local level,” McCormick says.

They agree an exhaustive study should examine how the state’s private school voucher program affects public schools. Both want to expand preschool and think the ISTEP needs to be replaced.

The are some differences in the fine details, though.

Ritz has been a louder critic of vouchers. And she wants free, state-funded preschool available statewide by 2020.

“We absolutely have to have high quality pre-K in all of our communities,” Ritz says.

But McCormick wants a slower expansion that at first, targets only “at-risk” students. It’d be an expansion of the state’s On My Way Pre-K program. That’s currently in five counties and serves about 2,200 children.

Both candidates want to rate schools on a handful of different measures — but Ritz wants a “dashboard” that has information. McCormick wants a “report card.”

So for those keeping an eye on this race: you might wonder, where do the candidates disagree?

Well, largely, on management and communication.

It’s been one of the largest critiques of the Ritz administration over the past four years: that the State Department of Education could be run more smoothly. And McCormick says that’s a reason she decided to run.

The Department of Education helps schools by giving guidance, making sure they follow laws and delivering state test scores.

McCormick says communicating is important. Not just how much communication, but the quality of it, too. And she says she will improve the quality.

“Educators know it, educational leaders know it, people who are tied to schools know that the situation is not good,” McCormick says.

Ritz points to several of her department’s practices she says are successful — traveling to multiple districts in an average week, weekly and monthly newsletters, and new positions.

“I actually have designated my deputy superintendent with any question,” Ritz says. “My outreach, I have outreach coordinators all over the state of Indiana.”

Outreach coordinators relay information between local educators and the department. Jeff Hendrix, executive director of the Indiana Association of Public School Superintendents, says, under Ritz, the department communication efforts have ramped up.

“I believe the outreach program that superintendent Ritz put in with the regional coordinators was a step to try to improve communication throughout the state,” Hendrix says.

But, he says one of the major challenges for the job, is, well, politics.

“There’s politics in way too many things and education has become one of those as well,” Hendrix says.

Ritz, as superintendent, has been the only statewide elected official that’s Democrat. And that’s made things challenging — from political quarrels with Gov. Mike Pence to trouble creating policy with the state board of education.

Yet, getting politics out of education is another thing both McCormick and Ritz agree on.

It’s an argument made by the candidates from each political party.