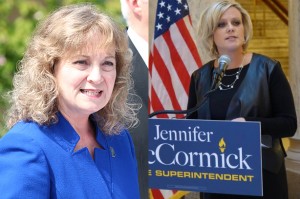 Glenda Ritz and Jennifer McCormick, the candidates for Superintendent of Public Instruction, will debate in Ft. Wayne Oct. 17.

This election season finally has an end in sight. As you all are thinking about who will receive your vote on Nov. 8, we have an opportunity for you to learn more about the candidates for State Superintendent.

The state superintendent’s race is different from past years, as we have two educators running for the position. Want to know how they differ on issues or what they hope to bring to the role as head of the Indiana Department of Education? Monday, Oct. 17 we are co-hosting a debate between the two candidates.

The debate will be taped Monday but aired on public broadcasting stations at different times throughout the state in the following weeks.

Our own Claire McInerny will moderate the debate along with WFYI’s Education Reporter Eric Weddle.

In the Ft. Wayne area? Here are details if you want to join us and be in the audience.

Here’s when the debate will air on various public broadcasting stations across the state:

And we’ll post the full debate on our website after the fact so you can watch it as you have time before election day.