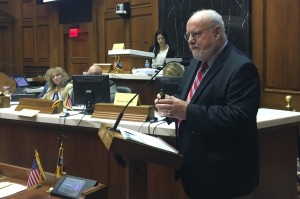 Testing expert Ed Roeber travelled to Indiana Tuesday to speak with the panel re-writing the state\’s assessment. Roeber encourage the panel to spend at least two years creating and implementing the new assessment system and not rush into it, like Indiana did in 2014. ” credit=”Claire McInerny/Indiana Public Broadcasting

The ISTEP panel that is developing a legislative recommendation for how to replace the state’s testing system heard from a slew of national testing experts Tuesday, who make the most specific suggestions to date.

Each of the experts addressed different part of the panel’s charge, and made some suggestions the panel hasn’t addressed yet.

Would Indiana Go Back To PARCC?

Michael Cohen is the President of Achieve, a company that consults with states on standards and testing, and who has worked many times with Indiana over the last few years. He consulted with the state after we left the Common Core consortium and decided to write our own standards, and thus our own test.

In terms of nationwide, Cohen explained there are 27 states administering a test written by themselves, 22 giving a Common Core aligned test (PARCC or Smarter Balanced) and two states have created a hybrid of PARCC questions mixed with their own.

When asked if Indiana should buy an assessment already created or continue creating their own?

For context, Achieve did oversee writing of the Common Core Standards and the PARCC consortium.

This is a daring suggestion for Cohen to give Indiana, since it was the first state to pull out of using Common Core standards and the PARCC consortium in 2014, and took us all on the windy path of writing our own standards and test in a quick amount of time.

But Cohen says if Indiana chose the PARCC test, it’s a little different than it was in 2014.

“There are two meaningful differences,” Cohen says. “One is as I mentioned before, there are no federal funds involved. And second is it is a shorter test than it was. I think they have reduced testing time by 90 minutes.”

It also would cost the state about half as much to use the PARCC test than to develop our own.

Another “off the shelf” option Cohen presented to the group was to contact a state like Massachusetts, that is creating a hybrid of PARCC and its own test, and pay them for their assessment.

Cohen also says since Indiana’s new standards are very similar to the Common Core ones, it wouldn’t take too much effort to make sure all test questions match our standards.

But this would prove to be a tough sell to the Republican held legislature, many of which supported the pull out of PARCC in 2014. But Senate Education Committee Chair Dennis Kruse, R-Auburn, says it’s not off the table yet.

“I think it’s something we should discuss and talk about, particularly with the Massachusetts combination that they’re doing,” Kruse says. “If we could take that and align it to Indiana standards I think that might be something we seriously consider doing.”

“Probably easiest will be to create our own,” Behning says.

The issue of timing was a huge part of Ed Roeber’s presentation, a consultant with Assessment Solutions Group, who has also advised the state through many of its testing situations the last few years.

Most recently, he advised the State Board of Education in 2015 when the ISTEP was significantly longer than previous years. That was a result of pulling out of Common Core without a solid plan in place for field testing the replacement test.

So it’s not surprising that his biggest suggestion to the panel was take your time.

He says any state wanting to develop a new test should give itself at least two years, and under the current law replacing ISTEP, it must be functional and administered to students by spring 2018.

“When things get rushed then you take shortcuts,” Roeber says.

He says after this panel decides on recommendations, the legislature will have to put something new into law, by the time that concludes, the State Board of Education and Department of Education would only have a few months to find a vendor and begin the process of rolling out the test. It’s not enough time he says.

And both Kruse and Behning listened, saying they will ask the General Assembly to change the current law.

The Move To Online Only Assessments?

The last two testing experts at Tuesday’s meeting strongly encouraged the panel and the legislature to stop administering the test in two modes: online and paper/pencil. Right now, the ISTEP is divided into two parts, where students take one part online and one on paper.

Marianne Perie of the University of Kansas called this practice “bizarre” and said it’s time the state chooses one, likely online.

She says moving everything online would also give schools and parents quicker results, something everyone involved in the process wants.

But Derek Briggs, of the University of Colorado at Boulder Education System, says there’s a balance the state must maintain when focusing on quicker results.

“There’s something to be said for quality control,” Briggs said. So while teachers, parents and many policy makers would love for assessment results to arrive within the week of a student taking the test, he says it’s important to make sure these tests are scored correctly since they are used for so many measurements.

He also stresses that while many panel members, whether politicians or educators, want to be able to say this new test will fix all the old problems, there are choices to be made. A test can’t be two different forms that different schools prefer, or test every subject and standard deeply. He says everyone in the state has to look at the new test, whatever it looks like, as a compromise between all of the very complicated assessment systems.

“We can’t give you everything you were promised before and have a shorter test,” Briggs says.