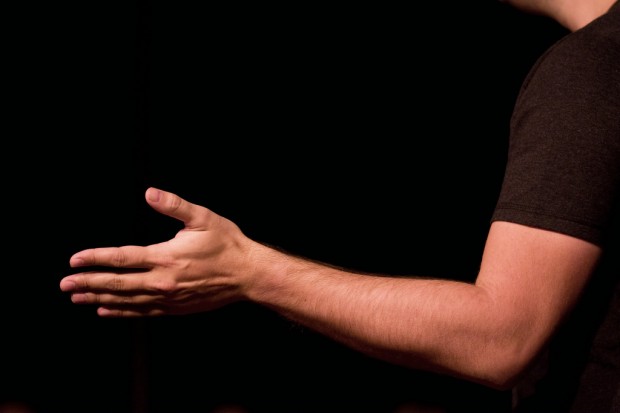 It’s your typical scene. A buzzing school cafeteria. Children laughing and chatting. Friends hanging out. For some students, a good time.

For others, though, completely terrifying.

Socializing can be, well, hard. And for students with high-functioning autism, anxiety or attention deficit hyperactivity disorder, it can be particularly difficult.

So, a group of doctoral students at Indiana State University hope to help by teaching a simple technique: improv theatre skills.

“I thought this would be a unique way, and a fun way, to get children engaged who might not otherwise engage socially,” says Rachel Magin, a clinical psychology doctoral candidate at Indiana State University. She says, often, these are children who struggle to understand body language or pick up on social cues.

When children participate in improv games, they think about interacting with others in an atypical way. It’s structured, but fun. There’s a framework, but its flexible.

A Class For Young Students

Magin and colleagues will lead seven free, weekly hour-long classes for children ages 6-9. Each class will have a particular theme, including “introducing yourself,” “making eye contact,” “understanding emotions,” “assertiveness” and “physical boundaries.”

Children will participate in theatre activities, like games where they tell each other scary or exciting stories… in gibberish.

“It helps them see how other parts of body language and tone of voice and things like that impact your interaction with others, compared to just language,” Magin says. “It gets them out of their head, it gets them involved with an activity that’s a little different and unique that they’re not familiar with.”

Magin says these classes were inspired by a 2013 study she conducted. In her study, children ages 7-14 participated in role playing activities and improv games that required nonverbal communication.

“We found that the parents reported significant improvements in social skills and decreases in their children’s level of anxiety,” Magin says.

Much More Than Comedy

Improvisation is largely associated with quick wit and humor due to popular TV shows like “Who’s Line Is It Anyways?” but it can deliver much more than comedy, according to Ron Berk, professor emeritus at John Hopkins University.

“It deals with certain skills that typically are not taught or you can’t teach easily by other means, that’s what’s so unique about improv,” Berk says. “Those [skills] are building trust, thinking quickly on your feet, working together in a team.”

Berk says it’s no surprise that improv is so prolific — from entertainment, to corporate team building exercises, to activities like Magin’s. Teamwork is an integral characteristic — and students get experience working together, whether they realize it or not.

“And if students have problems consciously relating to others, here, you’re concentrating on whatever instructions you’ve been given, in terms of the technique,” Berk says. “So you’re not really dealing with phobias you might have in relating to others.”

For Children Who Struggle Socially, A Support System

The first rule of improv is “yes, and…,” meaning everyone’s input is valid. It’s a method that Bill Skaggs, IndyProv Managing Creative Director, says both furthers an improv scene and brings people together.

“Saying ‘no’ puts up a wall, so [yes, and…] continues the scene to go further. If you’re trusting of your scene partner, you can trust anything that they’re saying,” Skaggs says. “The biggest thing someone takes away is support.”

But the concept of “yes, and…” can also be a challenge for children who struggle socially, especially with children with high-functioning autism.

“They can get stuck in their ways, so it can be hard for them to go with the other person and say ‘yes, and…,’ instead of being like, ‘No, I disagree with that, I want it to be this way,'” Magin, the graduate student, says. “It can be challenging and difficult for them, but eventually I think it helps them grow in that area.”

She says her class will also teach parents ways to work on skills at home with their children.