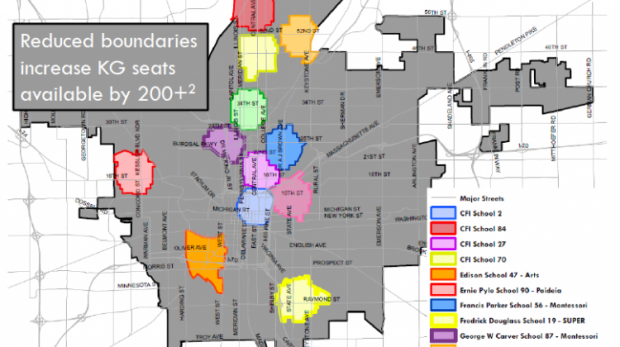 The boundary zones for some of Indianapolis’ most popular and high
performing magnet schools will be narrowed starting next year in an
attempt by Indianapolis Public Schools leaders to offer poor and
minority students a better chance to be picked in an enrollment
lottery.

The district has been under fire by some in the community and a board
commissioner who have charged the current system gives an edge to
white, higher-income families because the current priority zones for
enrollment cover large areas of the neighborhoods where these families
live.

Critics also say that an insufficient number of in-demand magnet
programs for elementary age students has caused families who live
outside the priority zones to be stuck on enrollment waitlists.

IPS magnet schools use weighted lotteries for enrollment. That means
students who have a sibling in a school or live within a boundary zone
near a school are given a higher chance of being picked in the lottery
than a student from somewhere else in the city.

District officials believe, in part, the boundary zones has caused
disparities like at Center for Inquiry at School 84 where just 5
percent of students are black and 83 percent are white. Other magnet
schools have lower levels of race disparity, including different CFI
schools, when comparing a school’s enrollment to the district’s entire
student body where whites make up just 20 percent.

The new admissions preferences shrink boundary zones for the 14
magnets from around one mile to a half-mile radius, thus reducing the
number of families who would have that priority factor. The district
used U.S. Census blocks to create the half-mile radiuses around each
school.

The change is expected to open up more than 200 kindergarten seats for
students outside the priority zones in the 2017-18 school year.

Christine Collier, a founder of Center for Inquiry and principal of
the CFI at School 70, spoke in favor of the proposal at Tuesday’s
board meeting. The addition of priority boundaries to the magnet
lottery in 2006, she said, caused the schools to become more like the
neighborhoods they’re located in, rather than the district.

“We have created a system that blocks out many and lets in a few,”
added CFI School 2 Principal Andrea Hunley in comments to the board.

Commissioner Gayle Cosby, who has raised concern over the the racial
makeup of students attending some magnet schools, voted to approve the
change.

Cosby said she was appreciative of the district’s proposal and hoped
it was the start of the dealing with more equity issues. She noted
that some families who live near the magnet programs may be troubled
that they would now face a less certain admittance for their child.

“Magnets are not boundary schools, they are open to the entire
district,” she said. “So we need to be mindful of the fact that though
a magnet school is located in a neighborhood it’s not there intending
to serve that neighborhood.”

But parents like Hannah Kiger say the changes make it harder for
parents in the Fall Creek neighborhood to send their kids to the
nearby Center for Inquiry School 27.

“If this is such a good plan why is there so little public discussion
about it,” she said. “This really feels like it’s being pushed through
before the community can figure out what happened.”

IPS Commissioner Michael O’Connor said despite addressing issues of
equity with this proposal, the district still needs to make popular
programs available to families who want them. Cosby, among other
community groups, has called on programs like CFI to be established
around the city.

“As we go from the old map to the new map, it does point out some
glaring places where we are missing some opportunities for families,”
O’Connor said. “And obviously our commitment is to make sure
everybody has access to a high performing school.”