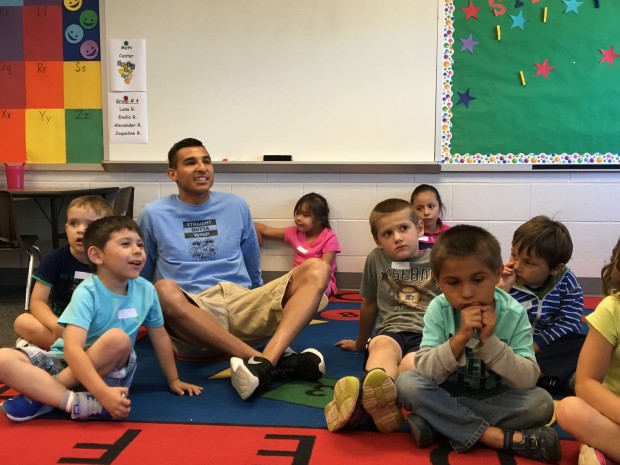 Elias Rojas is a first grade teacher at West Noble Primary school in Ligonier. As one of the school’s few bilingual teachers, he volunteered to participate in the school\’s new dual language immersion program. (photo credit: Claire McInerny/Indiana Public Broadcasting)

Indiana’s schools are seeing increased enrollment in the number of English learners, pushing many schools and communities to adapt to the growing population. This can often mean there are multiple languages spoken in a classroom.

One place where English and Spanish are both heard is Elias Rojas’ first grade class at West Noble Primary School. The school is in Ligonier, a small town North of Ft. Wayne. In the district, 50 percent of the students are Latino.

This makes Rojas, who grew up in a Spanish speaking home in Chicago, an asset to the district.

“I understand how these kids come in, I understand the kind of households they come from,” he says. “I understand the fears they may be feeling, and I think I have a good understanding of how their brain is working because at one time I was right there with them.”

Right now Rojas teaches these students in English and speaks Spanish if someone needs extra instruction. But starting in January, this is going to change. Rojas’ school, West Noble Primary, applied for and won a state grant for a dual language immersion program.

This kind of program means half of the school day is taught in English and half the day in Spanish. The grant is part of a pilot program approved by the 2015 General Assembly. This is the second year money was awarded, and West Noble received $85,000 to launch the new program.

West Noble Primary’s new dual language immersion program will be in two of its eight kindergarten classes. Each class will have a lead teacher, who speaks English, and a Spanish speaking teacher who works in both classrooms. The instruction, materials and conversations with teachers will be split evenly between English and Spanish. 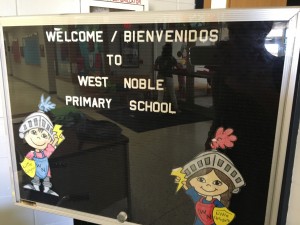 Principal Brian Shepherd is excited to start it, but knows that designing new curriculum and procedures for some of his teachers is daunting.

“We’re going to get through this together, we know it’s going to be difficult,” Shepherd said. “But uncomfortable makes you grow. You don’t go through life being comfortable. So this is the right thing to do, not the easy thing to do.”

Shepherd’s taught in Ligonier schools for decades. He remembers the exact moment when he realized working with English learners would become a crucial part of his job.

“In 1987 I was hired as 4th grade teacher and I can remember when the first little girl came into my room, Maria, and spoke no English,” Shepherd said. “I did not know what to do for her. I went down to the kindergarten room, got a picture book and we started pointing to pictures…then the school was very proactive and the EL program was born.”

The Next Phase For Education English Learners

For years, the English learner program served many of the Latino students that came to West Noble. But now that 50 percent of the kids come from Spanish speaking homes, Shepherd and the district decided to try something new with the immersion program.

Shepherd and the district’s EL director, Candice Holbrook, are hopeful this program will make an impact outside of the school.

“It really is reflective of the community that we serve and that we live in,” Holbrook said. “It’s an opportunity not only to promote bi-literacy but promote really bringing the community together.”

Rojas says he’d like to see the Latino and white populations integrate more, because now, many sports split along ethnic lines as well as the churches.

Rojas volunteered to teach a dual language immersion class, because he knows its benefits. He grew up in a similar program in Chicago, where being Latino was common and speaking two languages was celebrated. It wasn’t until he attended Indiana Wesleyan University that he realized that wasn’t the norm.

“That’s when I realized ‘Oh, I am a minority’,” Rojas said. “Until then, obviously I knew my ethnicity. I knew my heritage, I knew I spoke two languages. It was very much a part of my town, my city, so I didn’t feel like I stuck out.”

And Rojas wants his students, Latino and white, to have the same confidence around people from different backgrounds.

“I want them to feel equipped with and have the mentality to have a diverse mentality,” Rojas said. “To have them not see a minority and not say that’s a minority. That is a person.”