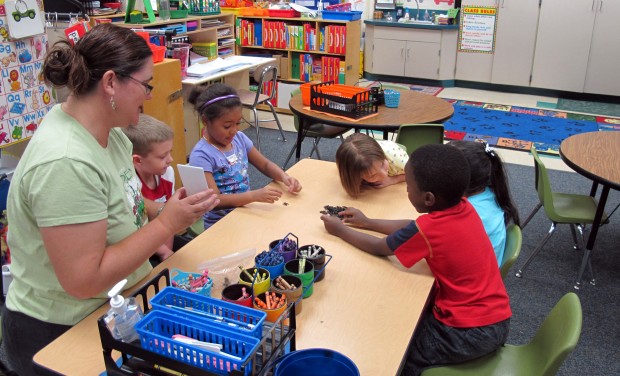 In this file photo, students at a pre-kindergarten camp in Avon, Ind., play a counting game. Indiana lags behind most other states in enrolling young students in school programs. (Elle Moxley/StateImpact Indiana)

Although most Indiana students do attend kindergarten, students are not required by law to go to school until age seven.

The Annie E. Casey Foundation Kids Count data book, a national report on child wellbeing, reports Indiana ranks 40th in the nation for preschool enrollment: parents of 60 percent of Indiana’s three and four year olds say their children are not in school. Only 10 states have fewer young children in school programs.

According to some experts, missing out on those early years is a big deal.

Early Learning Indiana is an preschool provider and advocate.

Preschool students may learn early math, language skills and life skills, like how to sit still or take instruction.

“Those experiences literally help to shape the architecture of a child’s brain,” said Mitchell.

Access to preschool has been a major platform point in the upcoming election, as we previously reported.

State Superintendent Glenda Ritz wants to see preschool available to all Indiana kids — and says it should be at the front of lawmakers’ minds as they enter the 2017 legislative session.

The $150 million proposal to expand preschool in every district in the state would be less than one percent of the state’s annual budget, Ritz said. She says it’s among the Department of Education’s top policy priorities heading into the next legislative session.

In response, Gov. Mike Pence has said the state should focus funds on students with certain income qualifications, not all students.

Under the state’s existing preschool pilot program, families are only eligible if they have incomes up to 127 percent of the federal poverty level — about $31,000 for a family of four.

“When it comes to disadvantaged kids the benefits of opening doors of access to early childhood education is very significant,” Pence said. “And that’s where we’ll focus.”