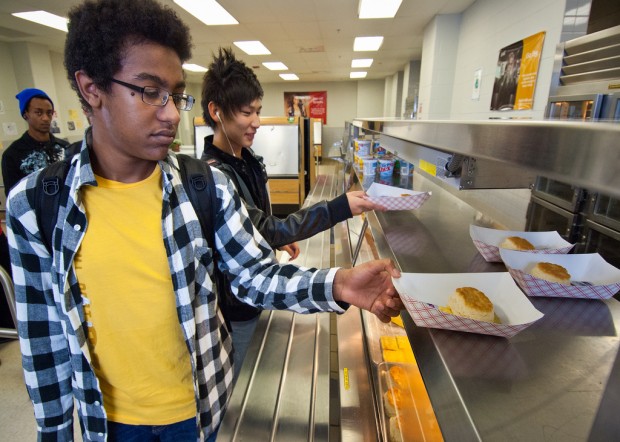 In this 2011 photo, students at Washington-Lee High School in Arlington, VA select their breakfast. A proposed congressional bill would tighten eligibility requirements for free- and reduced-school meals. (USDA/Flickr)

UPDATE The House Education and Workforce Committee approves the proposed bill — the Improving Child Nutrition and Education Act — which would change the federal school lunch program to ease nutrition standards and make it harder for schools to offer free meals schoolwide. The Republican-controlled panel said the change would better allocate limited resources, the IndyStar reports.

BLOOMINGTON, Ind. — A new bill in Congress aims to make it harder for students across the country to get free lunches. If the bill is passed, 120 Indiana schools with about 60,000 students would no longer be eligible to participate in the federal schoolwide lunch program.

The bill introduced by Tea Party Republican Todd Rokita, who represents Indiana’s 4th district, would tighten eligibility requirements that allow high-poverty schools to take full advantage of free and reduced lunch programs. If passed, it would decrease the number of schools that can provide free meals to needy students.

It comes at a time when low-income students make up the majority in public schools nationwide. Almost half of Indiana’s students are considered low-income, with one in five Indiana children living below the poverty line.

Rokita and supporters say the bill would help cut down on waste, fraud and abuse. Critics say the bill simply makes it more difficult for millions of needy students in thousands of schools to eat.

In 2010, the Congress passed the Healthy Hunger-Free Kids Act to do something simple: make sure kids, especially poor kids, don’t go hungry.

Children without enough to eat are more likely to have developmental delays, worse memories and difficulty acquiring social and academic skills.

It also ended certain measures that required students to prove their eligibiity for a meal.

“This created unnecessary stigma as certain students had to produce documentation in the school lunch line proving their low- or moderate-income status,” writes Olivia Barrow of the New America Foundation. “In some cases, school administrators expressed concern that poor students were simply choosing not to eat rather than be subjected to the stigma of proving that they were experiencing food insecurity.”

Currently, federal law allows a school to serve free lunches to all students if at least 40 percent of students qualify for free- or reduced-lunch.

The Community Eligibility Provision in the current law provides schools with funding for all students in those schools to eat, if they choose. Participating schools have seen increased breakfast and lunch participation and less administrative overhead.

“Schools no longer have to collect and verify meal applications or pursue unpaid lunch fees because all students are eligible to eat for free,” writes Barrow. “The free school meal program becomes more affordable because schools can purchase supplies in larger quantities when more students participate in the program, decreasing the cost per student.”

The bill from Rokita would change the eligibility requirements for districts to offer free lunch to all students.

Instead of the current 40 percent provision, Rokita’s bill would only allow a school to serve free lunch to all students if at least 60 percent of students qualify for free- or reduced-lunch.

“This bill will strengthen our commitment to those in need of nutrition assistance by enhancing program integrity and fighting fraud, waste and abuse,” said Rokita, in a statement to Fox 59 news.

The Congressional Budget Office estimates the measure could save taxpayers around one billion dollars over the course of ten years, but critics remain wary.

In a Washington Post column, Jared Bernstein and Ben Spielberg from the Center on Budget and Policy Priorities, blast the proposed change.

“Raising the threshold would save a little bit of money, as fewer students would qualify for free school meals,” write Bernstein and Spielberg, “but the overall savings of about $1.6 billion over 10 years wouldn’t come close to offsetting the administrative burden, increased social stigma for low-income students, and negative health and academic effects it could create.”

Currently, 253 Indiana public schools provide free lunch to students under the Community Enrollment Provision. If the bill is passed, 120 of these schools with about 60,000 students would no longer be eligible.