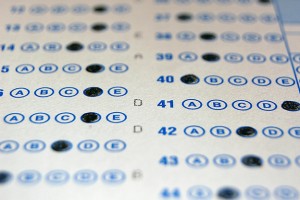 A program that pays students and teachers for passing AP tests is seeing its funding stream shift. (David Hartman /Flickr)

A program that incentivizes students who enroll in Advanced Placement classes and pass the AP test is trying to continue without federal funding. The program has successfully increased the number of students taking and passing AP science, math and English classes in Indiana.

The program, AP-TIP IN, started in 2012 as a way to get students in districts with high numbers of minorities and students living in poverty to enroll in AP science, math and English classes. The program is through the National Math and Science initiative and the first three years in Indiana were funded by the U.S. Department of Education.

The way the program works is the AP-TIP IN staff, located at the University of Notre Dame, works with schools that meet certain income requirements and have a large population of minority students. They then work with the schools to set goals for how many students will enroll in AP classes and how many of those will pass the AP test.

AP-TIP IN provides professional development for the AP teachers as well.

Karen Morris is the head of the AP-TIP IN program and says the point of the program is to get students enrolled and succeeding in AP classes who might not have ever enrolled.

“We use the AP Potential tool as a means to identify students who have the potential for AP success but may not be enrolled in that course because they many not have ever been in a rigorous course before.”

This potential tool is using a student’s PSAT score and consulting with the guidance counselor to identify students who might do well in an AP class.

Students enrolled in an AP class at these schools and then pass the test at the end of the year receive a $100 incentive. AP teachers can receive up to $1000 if more than 90 percent of their class takes the AP test and if they meet their goal of students passing the test.

This is the first year the program is existing without the federal grant, but many schools are continuing to administer it through local donors.

A grant from the Commission for Higher Education pays for the professional development portion of the program, but Morris says they no longer have funding for the incentive portion. But some schools are continuing this part of the program by looking to local donors.

Washington High School in South Bend recently joined the program and is receiving its incentive money from the St. Joseph Community Foundation.

Morris says she’d like to see more state funding to keep this program going, but the attitude toward it has shifted since they began in 2012.

“When we started the program we were under a different governor and a different state superintendent and there was a culture for college and career readiness that focused on AP, IB and dual credit,” Morris says.