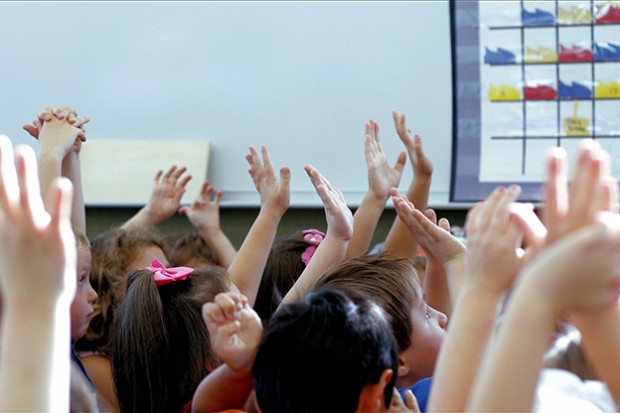 Getting teachers to realize their own assumptions can mean having conversations about an often-taboo topic: Race. (Phil Roeder/Flickr)

INDIANAPOLIS — At Eagle Creek Elementary School, the student body is diverse. Three of every four students are students of color. Over half of the school’s 520 students qualify for free or reduced lunch. Sixteen different languages are spoken in the students’ homes.

But for teachers at the school in northwest Indianapolis, it’s a different story.

There are 37 licensed, full time staff. All but four are white.

And that can mean a disconnect between teacher and student experiences. Teachers may enter the classroom with preconceived notions — unconscious biases, assumptions about a student’s background or misinterpretations of a student’s culture.

The complicated part? Teachers might not even realize they’re doing any of that.

To get teachers to recognize their assumptions, Ayana Coles, an African American third grade teacher, invited fellow staff to talk about an often-taboo topic: race.

“I wanted teachers to be more aware of what they’re bringing into the classroom, but also shift the conversation towards how we can use our curriculum to empower our students,” Coles says.

So she gathered a group of teachers for an informal study group on race and culture, entitled Courageous Conversations. During the group meetings, Coles facilitated sessions for teachers to speak about their own racial experiences.

“We had very intense conversations about our own experiences with race, our children’s experience with race,” Coles says. “How that effects school, how our biases can play a role in our classroom.”

It was an awakening that reverberated throughout the building for staff like Principal Kevin Kempton, a white man.

“The goal of that was could we build a safe environment where staff of different cultures could talk openly about their questions?” Kempton says. “Even ask simple questions like ‘Can I use that terminology? Is that right or is that wrong?'”

Kempton says it also laid the groundwork for teachers to talk sensitive topics — white teachers’ own biases from growing up in all-white neighborhoods, black teachers’ concerns about their children’s safety and each person’s role in making the school more culturally competent.

“I wanted to make sure ‘Can a white middle class principal be effective in a building that is different than me?’,” Kempton says. “For a while, I was afraid there may be a ‘No’ to the answer.”

Kempton found the conversations so eye-opening and useful for teachers, he made conversation about cultural relevancy and its impact on instruction part of formal teacher training. This school year, all full-time, certified teachers participated in the conversations.

The Indiana Department of Education recognized the school for the productive conversations. Kempton’s seen the language staff use in the building change. And his opinion about his own role changed, too.

“I have come to the conclusion where now it’s a very strong ‘Yes’,” Kempton says. “But I will only remain effective if I remain mindful of the students I serve, and become as open and knowledgeable and self-reflective as possible. That’s going to be key.”

But challenges remain at the school. Almost one in five students are Hispanic, but there’s no Latino teacher at the school (something Principal Kempton says he’s like changed). About half the student body is black, but only four teachers are.

Kempton says he’s grateful the college student tutors that work with the school through IUPUI are a more diverse group.

“What I’m wanting my kids to do is just see role models that look like them that inspire them,” Kempton says. “It bothers me to think that in a minority school, all of their models that they’re seeing may not look like them. I want them to see themselves.”

Teacher Ayana Coles, who led the initial discussions on race at Eagle Creek, says there’s no easy formula to make a school culturally competent, but it’s important to understand students.

“I wholeheartedly believe that children of color, people who come from lower socio-economic status … they’re oppressed,” Coles says. “We can teach children how to think about the world around them and then use education to change it.”

But to reach students, that means getting through to one group first.

“That won’t happen,” Cole says,” if teachers aren’t on board.”