Over the next few weeks the Ed Team at NPR is tackling a simple question: Why do some schools have so much money, while others, well, don’t?

This reporting project is a national collaboration. StateImpact Indiana’s own Claire McInerny was one of 20 education journalists who contributed across the country, and the project explores the dollars behind schools both rich and poor across the nation.

Indiana will be one of the featured states next week, in part two. The web story will take an in-depth look at the money flowing, and not flowing, into schools in the Hoosier State.

This week, in part one, the NPR team takes a look at disparities between how local and state dollars flow to different districts. Check out the interactive map on their website that shows spending per student, by school district, across the country. 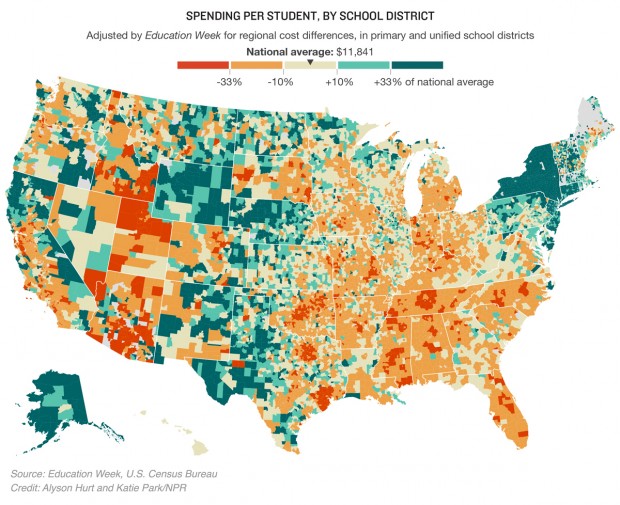 The mechanism behind school funding?

These days, when we ask “the inhabitants in general” to help pay for their schools, we usually start with local property taxes. That’s nothing new. The property tax is an old idea, older than America itself.

The problem with a school-funding system that relies so heavily on local property taxes is straightforward: Property values vary a lot from neighborhood to neighborhood, district to district. And with them, tax revenues.

And in Indiana, that gets a lot more complicated.

The state constitution says that the state can’t collect more than one percent of a homeowner’s gross assessed value in taxes. It’s what’s commonly referred to as property tax caps.

Owners of farmland or rental property won’t pay any more than two percent of the property’s value in taxes. Any other type of property — notably, commercial property — gets capped at three percent.

Here at StateImpact we previously estimated that the caps saved Indiana property owners a total of $704 million on their tax bills in 2013. But it also meant big losses for schools relying on property taxes to fund schools.

The caps prevented school districts from collecting more than $245 million in property taxes in 2013.

Former StateImpact Indiana reporter Kyle Stokes made a video and great explainer laying out how this all works.

Be sure to keep an eye on the NPR Ed Team, their series and a national discussion on school funding over the next few weeks. Follow us on Twitter or follow the conversation online with #schoolmoney.