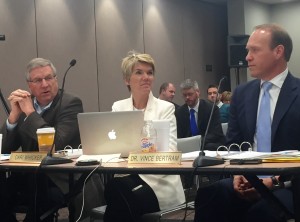 The State Board of Education voted Friday to finalize the new A-F system for schools. Their changes include a new growth measure to the accountability system.

(High school students only take the ISTEP+ in one grade level, so multiple factors contribute to those A-F grades.)

The new rules include student growth on the ISTEP+ in the elementary and middle school and high school calculations. This means, if the student’s final ISTEP+ score is a failing grade, but they improved from their score last year, the school will accrue positive points.

And calculating this growth requires a statistical formula, which is what the SBOE voted on Friday. The board voted unanimously to add the growth formula into the new A-F system. 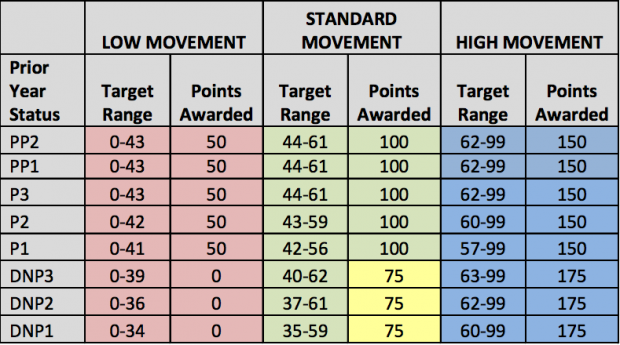 This table represents the percentile ranges that will be used to calculate growth in A-F school accountability grades. The ‘target range’ column shows the percentile range a student’s score may fall into, and how many points the school will earn from that grade. Students whose scores fall in failing percentile ranges can still earn points for their school. If a student’s score on a test puts them in a new category (the far left column) he/she is considered ‘high movement’. If their score stays steady in a certain percentile range, they get the points in the ‘standard movement column. If a student does worse, and receives a lower score than the previous year, they get points awarded in the ‘low movement’ column.  (photo credit: Indiana State Board of Education)

Judy Demuth of the Indiana Urban Schools Association testified before the vote, encouraging the SBOE to postpone its vote on the growth table. The IUSA opposes the growth model because they say it creates “winners and losers” by using percentiles to classify student grades.

“This method of determining student growth forces a comparison of students against each other,” DeMuth said. “Which is contrary to Indiana Code 20-31-8-5.4 prohibiting peer to peer comparisons.”

But Cynthia Roach, Senior Director of Assessment and Accountability for the SBOE, says the Attorney General’s office and the board’s legal staff already addressed this concern.

“They determined it to be legal within requirements of [the law],” Roach said. “All student progress is judged to their growth.”

Board member Cari Wicker echoed this sentiment. She says the calculation doesn’t need to be easy to understand to be valuable.

“Simplicity is not the goal,” Cari Wicker, “The goal is to be more fair.”

School A-F grades will be calculated using this new system in 2016.