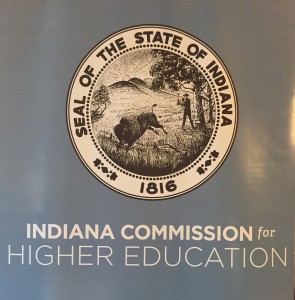 Lubbers says higher education is more important than ever for Hoosiers and says the Commission’s focus remains on making sure more Hoosiers receive credentials past high school, and making sure those credentials are meaningful.

The Commission’s goal is to get 60 percent of Hoosiers to earn some sort of credential past high school by 2025. Currently, that number sits at 36 percent, 41 percent if you count certifications.

Lubbers says going into the next year, the Commission will focus on making sure a degree or credentials earned from an Indiana institution has value.

She says rather than earning a degree based on credits, the Commission wants to work with employers to make sure credits earned also means earned knowledge about practical job skills. To do this, she says universities must make a bigger effort to help students get internships while in school.

“We know that internships are the number one college experience that leads to a job. And one of the best and most effective ways to reduce Indiana’s brain drain,” Lubbers said. “Yet too too few college programs include an internship as part of earning a degree.”

The survey asked alumni from Indiana’s private and public universities about their experience at these schools, with what Lubbers calls “well being” questions.

Early results of 8,000 alums show overall satisfaction with their experience, but Lubbers wants to address areas like finding jobs and internships for those that were unsatisfied.

“It shows that the value to a graduate in Indiana is higher than the national average,” Lubbers says. “We’re going to align the Gallup results with our strategic plan.”

Full results from this report are not yet available.