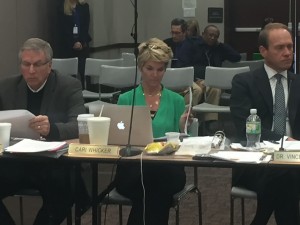 State Board of Education members Steve Yager, Vince Bartrum and Cari Whicker voted, along with all other board members, to table the discussion on changing graduation requirements. (photo credit: Claire McInerny/Indiana Public Broadcasting).

The State Board of Education voted Wednesday to indefinitely table the discussion on re-writing the state’s graduation requirements. The board voted after reviewing recommendations from a task force and listening to more than two hours of public testimony.

Every board member (besides state superintendent Glenda Ritz who abstained from the vote) voted to indefinitely put aside the discussion and not schedule a future vote to approve new graduation requirements.

The SBOE took up the issue of developing new graduation requirements in the fall, but a flurry of pushback led the SBOE to prolong the conversation. The public objected to new math credits, fine arts credits and concerns over how special education students will obtain a degree. Many also objected to the sentiment that high school students pick a career path.

The board created a diploma task force, comprised of SBOE and Department of Education members and staff as well as educators of a variety of subjects and parts of the state. The group met four times over the last few months, discussed the different requirement changes and came up with new drafts of the diploma types.

But during the public comment period Wednesday, many of the educators that served on that task force spoke against even making their proposed changes.

Bluffton High School principal and task force member Steve Baker asked the board if it’s necessary to make this re-write.

“Only if somethings not working and if we do it for the right reasons,” said Baker. “What we have now works, it creates balance.”

Not all testimony opposed change. TJ Rivard, who works in the University Transfer Office at Indiana University, says one of the math tracks in the proposed Core 44 diploma, the Calculus track, would prepare all students for whatever major they choose. His point was that many college students change majors well into their college experience or after they complete credits at a community college or regional campus, and if they have as much math under their belt as possible they’ll be prepared for when they change their major.

One of the contentious changes in the re-write is an additional math credit for students pursuing the diploma that focuses on college prep. Many argued some high schools might not have the staff to meet this mandate.

“Any time you add requirements to graduation, for instance, adding two credits in mathematics will require more math teachers,” says SBOE member Vince Bertram. “Do we have an ample supply of math teachers and how do we solve that problem before we move forward with an expectation that’s going to have a serious implication for schools.”

Superintendent Ritz abstained from the vote because she says she views herself more as a facilitator of this discussion. But she says having more time to study the more contentious points will make any final decision on the matter more thoroughly thought out.

After hearing all of the testimony, board members said they didn’t want to pursue the issue until they have more research and data.

The 2014 legislation that mandates the SBOE study the new diploma issue does not require it to take action.