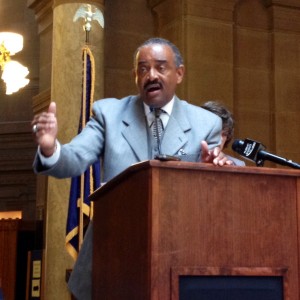 Vernon Smith is one of the House Democrats that proposed amendments to SB 10 Wednesday. (photo credit: Brandon Smith, IPBS).

The House continues to move forward with the bill that will among other things, allow districts to give teachers raises outside of collective bargaining with a teacher’s union.

Senate Bill 10 has similar language to  HB 1004, which the Senate killed last week, saying the perception of the bill became that the General Assembly was “anti-teacher”, according to Senate President Pro Tem David Long.

That bill allowed would have allowed a superintendent to increase the salary for a teacher in a “hard to fill” area (subjects like math or science or in schools in rural or urban districts). It was supposed to help schools with recruiting teachers, but the backlash from Unions and educators caused the Senate to stop the bill once it got in that chamber.

But earlier this week the House ed committee called SB 10, a bill with similar language, on the last day for committee hearings. This bill differs from HB 1004 in that it gives more reasons to issue a raise to a teacher without negotiating with their union.

Since this bill originated in the Senate, if the House makes any changes to it, it would have to return to the Senate where it would likely die alongside HB 1004.

Rep. Ed Delaney, D-Indianapolis, wrote one of the amendments and says this bill could lead to favoritism and discontentment among teachers who make less than their peers.

“You have to think very, very deeply about what you’re doing here,” Delaney said to the House. “This is the most disruptive bill. It goes to the core of the professional relationship between teachers, each other and their boss.”

Delaney urged against passing this bill because it could disrupt a school environment if teachers are upset about salary increases.

But the bill moves forward unamended, and will likely go to third reading this week. This bill narrowly passed out of the Senate, 26-24, meaning it’s one of the few bills where legislators are voting across party lines.

Under SB 10, a superintendent may give a teacher a raise outside of collective bargaining for any of the following reasons: