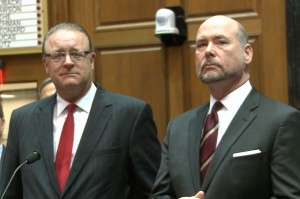 Senate President Pro Tem David Long announced Thursday the Senate would not move forward with House Bill 1004, which would have allowed school districts to offer teachers in hard to fill areas more money without consulting a teacher’s union.

The bill was largely controversial because teachers unions said the law would pit teachers against one another: If one teacher had to go through the collective bargaining process to get one salary, and another got a higher salary because he or she taught a hard to fill subject.

Some superintendents also spoke out against the bill, saying negotiating individual contracts without the help of the unions would make hiring more time consuming.

This opposition led the Senate to kill the bill.

“We believe that the bill’s intent to deal with the teacher shortage issue in Indiana was misperceived by some as something that would be harmful to teachers,” Long said. “That was not the bill’s intent, nor do I believe that would actually occur. However, it is clear we need to go back to the drawing board, work with the education community and find the right approach to address this issue. I look forward to working with education leaders throughout the state to find the right answer.”

Teresa Meredith, Indiana State Teachers Association President, told StateImpact earlier this week she is also worried that it would lead to salary inequalities. The example she gave was that a school could offer a coach from another district a higher salary as a recruiting tool and the union wouldn’t be at the table.

Meredith expressed gratitude to legislators for dismissing the bill.

“Teachers wanted to be heard and it appears senators listened,” said Meredith in a statement. “While we are pleased at this recent development, we will continue to work on Senate Bill 10 to ensure our representatives are listening too. The concepts in SB 10 are equally divisive and unnecessary.”

HB 1004 was one of a few bills aiming to help districts attract and recruit teachers into Indiana classrooms, after state superintendent Ritz formed a commission looking for solutions to Indiana’s teacher shortage.