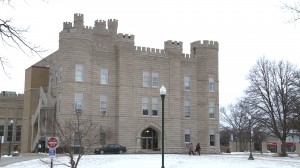 Eastern Illinois University is one state university in Illinois dealing with huge budget shortfalls because of a loss of millions of dollars in state funding. The Illinois legislature and governor are at a stale mate passing a budget, meaning state funding is on hold. (photo credit: Harrison Wagner/WTIU News).

Illinois’ public colleges are in trouble and it could have an impact on higher education in Indiana. It’s more than halfway into the fiscal year and Illinois’ Republican governor and Democratic-controlled legislature are still deadlocked over the state budget.

The impasse means the state’s 12 public universities and 48 community colleges haven’t received a penny of state funding for nine months.

It’s a nerve-wracking time for students. They’re on the line for tuition because the state isn’t paying out money for grants and scholarships, making out of state tuition in Indiana more affordable than before.

Higher Education In Illinois Is In Trouble

“We all care about our school, and we don’t want it to close down,” says Cisneros.

They’re at home walking through campus, but in some ways feels like they’re standing by and watching it die by a thousand cuts.

“We’re not just here because we want to go to a college away from home. We actually want to be here.”

But that decision isn’t totally Cisneros’ to make.

Eastern Illinois is struggling. Lawmakers’ failure to pass a state budget this year means public universities have gotten no money.

At EIU that amounts to $40 million for operations and another $7-9 million for grants for low-income students.

Universities are dipping into their reserves and emergency funds to stay afloat, but as the impasse heads into its ninth month, the cuts are getting deeper and more noticeable.

Eastern laid off nearly 200 employees and is requiring others to take furlough days. The friends can’t help but feel anxious.

“I know all of my teachers have talked about it in every single class,” says Reposh. “And the teachers seem scared, and if you’re professors seem worried then it makes the students seem worried too.”

“Right now I’m trying to be optimistic about it but if it comes down to it where there’s really just not any hope then I’m definitely going to need to look at new schools,” says Cisneros.

Eastern’s president David Glassman declined our request for an interview, but in an effort to ease concerns and also to dispel rumors he penned a letter to students this week saying he expects the state appropriation soon and reiterated that the university is not closing.

Will Illinois Students Enroll In Indiana?

John Beacon, Indiana State University senior vice-president for enrollment marketing and communications, says there are a lot of places Illinois students can look if they want to transfer.

“If you’re a student at a school like that how confident are you going to be to continue there?” he says. “So there’s a natural tendency for some students to think about transferring elsewhere.”

Wisconsin, Iowa, and Purdue already draw a lot of Illinois students, but in some ways ISU is uniquely positioned. The campus is only about 40 miles from EIU and the towns are quite similar.

“Certainly the local students who go to Eastern Illinois University from those counties probably chose Eastern because of their location.” Beacon says. “Because we’re close to them, I would anticipate if there are students who are looking to transfer from Eastern they would look at us because we’re very similar in many ways.”

Indiana has seen a gradual increase this year in the number of students enrolling from Illinois, but the Indiana Commission for Higher Education says it’s too early to say whether that’s connected to Illinois’ budget impasse.

If students do increasingly keep transferring from Illinois there will be even less money flowing into schools in the form of tuition.

And as Eastern’s president wrote: “Without the state supporting public universities, the cost in tuition would become unaffordable for most Illinois citizens who would then leave Illinois to seek their higher education.”

The stalemate in Illinois isn’t expected to be over anytime soon.

WBEZ reported that Gov. Bruce Rauner gave lawmakers two options during his budget address last week: give him the power to make $4 billion in cuts or pass his reforms in exchange for a $35 billion budget.

Some politicos are speculating the governor and the legislature won’t come to terms until after the state’s primary election in March. Others think the political infighting will continue and there won’t be a budget this year.

That will be too late for some schools. Chicago State administrators told the General Assembly this week that in March the school will run out of money and be forced to close its doors.