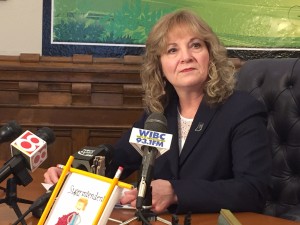 State superintendent Glenda Ritz is asking state lawmakers to study the state’s voucher program in the second half of this 2016 General Assembly. As the legislature began the week, Ritz praised efforts made during the first half and explained her goals for the next.

She says she is happy the legislature expedited two education bills into law in the first five weeks. Both bills help hold teachers and schools harmless from the low ISTEP+ scores issued this year.

Ritz also expressed gratitude for legislation that would create a committee to study the ISTEP+ and evaluate its effectiveness.

“Since my campaign in 2012, I have called for an end to the costly, lengthy, pass/fail ISTEP+ assessment system currently in place in Indiana,” she said. “Instead we should create a new, student-centered assessment that provides students, families and educators with very quick feedback about student growth and performance. I am pleased to see momentum toward the creation of a committee I called for to study the design of a new state assessment.”

Ritz is asking the legislature to amend the bills creating this committee to make the state superintendent its co-chair – a provision not in the current version of the bills.

Another bill the state superintendent wants to see signed into law is a House bill that mandates all schools offer every diploma type available.

“This legislation has particular positive impact for students with special needs,” Ritz said. “Every student should be allowed to choose the pathway that bests meets their education and career goals.”

Ritz’s biggest ask of the legislature as it finishes its session for the year deals with the state’s expansive voucher program. She acknowledges that although this isn’t a budget session, focusing on the financial impact of this system is important going forward.

“For that reason, I am calling for a pause on the expansion of school vouchers,” Ritz said. “For too long, Indiana has diverted funding from public schools without studying the impact on our traditional school system. It is time for our state legislature to fully study the fiscal and academic impacts that the school voucher system is having on Indiana’s education system.”

There are a few bills still being considered addressing different issues of school choice, and Ritz says her main goal would be to stop the expansion of the program.

Stay up to date with all education legislation being considered in our legislative tracker.