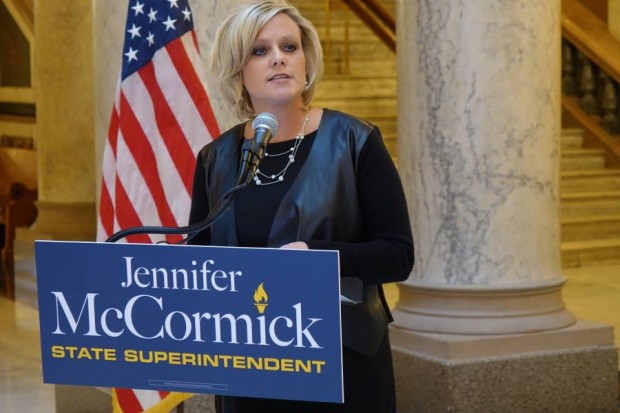 Claire McInerny: So what prompted you to join this race and get into politics after such a long career in education?

Jennifer McCormick: There’s been a lot of frustration and i know sitting in the superintendent’s seat the local level we, many of us have felt that. What with the lack of vision and leadership at the DOE it has had a huge impact on many schools. Through that frustration I’ve decided to step up and try to do something about that.

CM: What do you mean by there’s a lack of leadership at the DOE that affected as a superintendent?

CM: It has been no secret that our current superintendent Glenda Ritz and Governor Pence has publicly disagreed and not gotten along. Do you think running as a Republican would improve the relationship between the Department of Education and the governor’s office?

CM: Under the Every Student Succeeds Act that the federal government just passed, states have this opportunity to change how we used assessments. Our current legislature has talked about ditching ISTEP+, maybe utilizing some of these things that are in ESSA. What’s your stance on assessing students every year?

JM: Currently, many of us are running an assessment system at the local level that is formative, that is ongoing. So we have an ongoing assessment of student performance. None of that formative assessment is aligned to the summative assessment. So many of us are running the assessment system now that is very splintered, so cleaning that up would be a huge relief to not only teachers but administrators and parents. It’s very difficult to explain to parents here’s the beginning of the year, middle of the year, end of the year based on a formative assessment, but based on the summative assessment it’s way off. That’s very difficult to explain to a parent, so really where is your child? How are they performing? Where are those gaps? That’s a very complex system, it’s going to take more than the Department of Education in isolation to come up with a solution for that, but that again is going to take a team effort but it’s got to happen.

CM: Another issues that’s really important in Indiana is school choice. We’ve seen expansive charter laws passed and more money put into the voucher program in this state. Where do you stand with the issue of school choice here?

JM: For me, being in a public school, I’ve lived the money issue is where I think it becomes an issue for public schools. But every time, I’m a firm believer of if the environment at a particular school doesn’t fit the child’s needs then there are other opportunities and I would not tell a parent any differently. I’ve had many sit in my office and we’ve talked through things, and I’m very blunt about if this isn’t a good fit you owe it to your child, you owe it to yourself to find a good fit.

CM: Would you support or stand behind, for example, the governor putting more money into vouchers as the state has done the last few years?

JM: I won’t speak for the governor so I don’t know what his intentions are, but that’s a legislative decision.