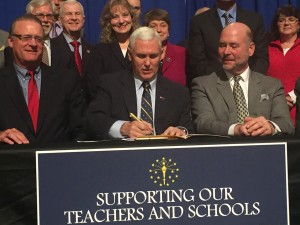 These bills were in planning stages before CTB released the ISTEP+ scores from the 2015 administration of the test. Those scores came out earlier this month and confirmed the expected dip – a 20 percent decrease across the state. It is generally accepted that this dip is not an accurate measure of student, teacher or school performance but a result of difficulties unrolling and administering the test.

Before signing the bills Pence acknowledged that Ritz anticipated the dip and was the first to come up with a solution for shielding schools and teachers.

“I also want to thank Superintendent Ritz, who first called this issue as a possibility to our attention in the middle of last year,” Pence said. “We appreciate her passion for our kids, her dedication, let me take this opportunity to thank you.”

Ritz warned the legislature that scores would drop, since many other states saw similar dips in scores when they adopted new assessments. Up until very recently, lawmakers and the State Board of Education dismissed her suggestions to enact a hold harmless plan for teachers in schools, which is what these two bills do.

Ritz was present at the signing and in an official statement thanked the legislature for passing both bills.

“The passage and enactment of this legislation is a welcome step and something that I have been fighting for over the last eighteen months,” Ritz said in a statement. “These common sense bills recognize the reality that when leadership in Indianapolis changes our standards, we need to give our schools time to adjust.”

These are the first bills to pass through the legislature this session.