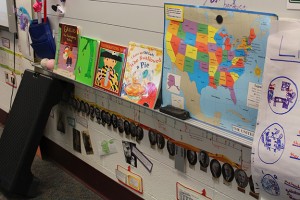 The legislature and the Commission for Higher Education both made efforts this week to attract and retain more teachers to the classroom in Indiana. (Photo Credit: Rachel Morello/StateImpact Indiana).

Fewer people are signing up to become teachers in Indiana, as we’ve been reporting since last summer. The number of new licenses dropped by over 10 thousand in three school years, and this week we saw two new actions taking aim at this problem.

The first attempt to increase the teaching force in Indiana comes from the legislature, which kicked off its 2016 session this week. House Speaker Brian Bosma says he will file a bill that creates a new program, called the Next Generation Hoosier Educator Scholarship.

This scholarship would give up to $7,500 a year to an Indiana high school student graduating in the top 20 percent of their class. To qualify, students must commit to earning a teaching degree at an Indiana university and teaching in an Indiana classroom for five years after graduation.

Details on funding the program aren’t established, and Bosma says it could come from outside sources or during next year’s budget session.

“We wanted the framework in place even if the funding was not this year,” Bosma says. “So that both students and our education schools can begin preparing.”

The second action taken this week was by the Commission For Higher Education. The state agency awarded $9 million in grants to institutions committed to recruiting and training teachers in science, technology, engineering and math subjects.

These grants went to organizations including the Purdue Research Foundation, Teach For America, Notre Dame, University of Southern Indiana Foundation, Independent Colleges of Indiana and TNTP.

The grants fund various initiatives, including teacher training for STEM subjects, dual credit credentialing, mentoring programs and retention programs. Commissioner for Higher Education Teresa Lubbers says the CHE follows up twice a year with grant recipients to make sure they are following through with what they outlined in their proposal.

Lubbers also says her agency is addressing the issue through data collection, to fully understand the issue.

“Our big promise to the legislature is we will provide the best data that we can to them so they can analyze where there might be a shortage and in what subject areas so they can really target their efforts to what we know are the shortage areas,” Lubbers says.

Bosma says the scholarship program will be outlined in House Bill 1002, which has not yet been filed.