ISTEP+ scores from the 2014-15 school year have finally been released – but the picture they paint is not pretty for Indiana schools.

Many expected scores to be on the lower end, since 2015 marked the first year Indiana tested the new set of academic standards adopted following Gov. Mike Pence‘s decision to exit the Common Core.

And that was indeed the case.

Last year, scores went up for both English/Language Arts and Math portions of the statewide assessment overall: 80.7 percent of students passed the ELA test, and 83.5 percent passed math. The number of students who passed both tests had also increased from the year prior, with 74.7 percent passing in 2014.

This year, scores decreased sharply on all portions of the test. Statewide, only 67.3 percent of students in grades three through eight passed the ELA section, and the pass rate for Math sat at 61 percent. Just 53.5 percent of students passed both sections.

Here is a map of results for the 2015 ISTEP+ exams, including data for private schools, traditional public schools and charter schools:

You can also click here to search our easily-sortable table.

Indiana’s Department of Education says 2015 scores are not comparable to previous years’ pass rates because of all the changes to the state’s standards and related tests. Instead, the IDOE says these new scores show for the first time the percentage of students meeting the new college and career ready benchmarks at each grade level.

In response to the numbers, state Superintendent Glenda Ritz reiterated the call for reforms to Indiana’s testing system. In a statement, she thanked students, teachers and administrators for their work during what she called a “challenging” school year of testing delays and technological issues, and said she thinks it’s time for Indiana to move away from the ISTEP+ once and for all.

“The one-size-fits-all high stakes approach of the ISTEP+ needs to end,” Ritz said in a statement. “Instead, Indiana should move towards a streamlined, individualized, student-centered assessment that provides students, families and educators with quick feedback about how a student is performing and how they have grown during a school year.”

The need to eliminate ISTEP+ is something other legislators have called for, too. At a legislative conference last month, House Speaker Brian Bosma (R-Indianapolis) said the legislature will reattempt conversations about using an ‘off the shelf’ test – a dialogue spearheaded last session by Sen. Luke Kenley (R-Noblesville). 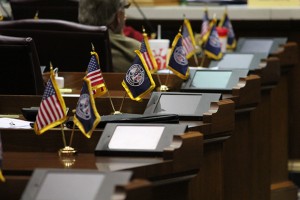 Lawmakers plan to bring forth some proposals to safeguard Indiana teachers and students from what they correctly predicted to be lower ISTEP+ scores this year. (Photo Credit: Rachel Morello/StateImpact Indiana)

Ritz says she plans to work with members of the General Assembly and the State Board of Education to oversee the development of a new assessment, as well as measures to safeguard school A-F accountability grades. State Board staff have already predicted that under the state’s current A-F system, lower ISTEP+ scores will result in a greater number of Indiana’s K-12 schools that will be considered failing – 17 percent, compared to 4 percent in 2014.

Legislators in both chambers have put forth bills this session to protect schools, teachers and students from what they correctly expected to be relatively negative results.

Rep. Bob Behning (R-Indianapolis), chair of the House Education Committee, plans to introduce a measure to decouple ISTEP+ results from teacher evaluations and essentially “hold schools harmless” for this year’s performance. Behning told StateImpact that House leadership plans to fast-track the bill, so he expects it to reach the governor’s desk for signature by late January.

Sen. Dennis Kruse (R-Auburn) introduced a bill Monday that would require the INSBOE to assign each school a grade that may not be lower than that assigned during the 2013-14 school year. Senate Bill 200 is the second measure addressing school accountability to come out of the Senate so far. The other, Senate Bill 4, was penned by Bloomington Democratic Senator Mark Stoops. Both Ritz and Gov. Pence have expressed their support for this option.

Lawmakers will be able to get to work now that the 2016 legislative session has opened. The Senate Committee on Education and Career Development plans to open discussion on both Stoops’ and Kruse’s bills during a hearing Wednesday.

Ritz has also said we can expect to see finalized A-F calculations by January 19.