After three years under management of a private charter company and nearly a decade of chronic failure, Arlington Community High School has returned to Indianapolis Public Schools. It’s the first school under state intervention to transition back to its home district and school leaders are under pressure from the community and state to make it work. In the series A New Day, WFYI education reporter Eric Weddle is spending a year reporting from inside the school on its successes and challenges. 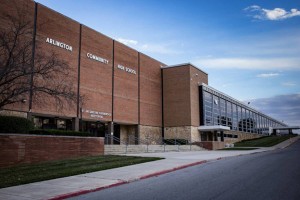 Arlington Community High School is a “top concern” of the Indiana Department of Education due to its ongoing turbulent atmosphere, an education officer told the State Board of Education Wednesday.

Rachael Havey, the Indiana Department of Education’s intervention school coordinator, described a Monday visit to the Northeastside school, where she witnessed masses of students roaming the hallways during class and after passing periods.

“They are just having a lot of difficulties with behaviour in the building,” said Havey, who also observed a handful of classrooms. “It is a concern for sure.”

Arlington is the first school under state intervention to begin a transition back to its home district, Indianapolis Public Schools. During the past three years the 7-12 school was managed by Tindley Accelerated Schools, a charter operator contracted by the state. Tindley ended the contract after a dispute over funding.

Arlington staff have struggled to set a consistent tone on student behavior since the 2015-16 school year began. Around 630 students are enrolled and more than half of those students did not attend Arlington last year.

Violence, marijuana use and vandalism have been regular occurrences in the 380,000-square-foot school. WFYI News has previously reported on the extant of challenges for students, teachers and staff at the school.

Gordon Hendry and other board members want more details on steps to correct problems and ensure IPS can meet academic goals set for the school, such as improved graduation rates.

It is likely that IPS Superintendent Lewis Ferebee and other IPS officials would be called by the board to attend their December meeting to answer questions.

“Based on what I’ve heard there are real concerns on basic things like security,” Hendry said, later adding: “I want to ensure that the environment is right — and I know we are in a period of transition — but I want to make sure, we as a board, are actively engaged…”

In May the board approved a $500,000 contract for the company, which has been credited with improvements at the Evansville school district, to help ease Arlington’s transition back to IPS. A specific date of when Mass Insight’s support would start was not set by the state yet some board members expected it would have happened sooner than October.

“We are a little behind the eightball because Arlington really was not involved with Mass Insight until now,” said State Superintendent Glenda Ritz about technique’s the consultant can offer for classroom teaching and student behavior. “Perhaps that work should have already happened early on and right at the start (of the school year).”

Havey’s comments were made during an update on the ten public schools in Indiana that are turnaround academies. That means they are under purview of the State Board of Education due to chronic failure.

She said the IPS central office was giving “a little more support” to Arlington and that Arlington’s inclusion in the district’s transformation zones, clusters of schools receiving extra funding and support for overall improvements, was a positive step.

“But that is definitely a school to be paying attention to, what is happening right now and their needs,” Havey said.

Those ten “turnaround academies” include three former IPS schools that are now run by private companies under a contract by the state board of education.

According to a report released Wednesday on the turnaround schools, Arrington was tied for highest student attendance in August, at 99 percent, and was at 94 percent in September.

Arlington reported more than twice the number of student suspension in August, among the ten schools, at 98 occurrences. For September, 77 suspension were reported at the school.

The State Board of Education meets 9 a.m. Dec. 2 at the Indiana Government Center South – Conference Room B.