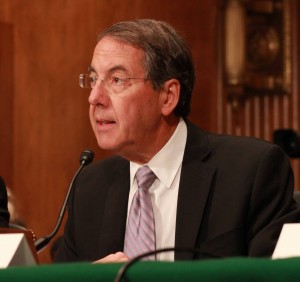 Ivy Tech Community College President Tom Snyder will retire in 2016 from leading the statewide system. The college’s Board of Trustees approved a transition contract this morning that allows Snyder to more easily step down about a year before his current contract ends.

Snyder, 72, has run the college since 2007, two years after it was rechartered as a statewide network. Since then it became the nation’s largest singly accredited statewide community college with 34 campuses granting certificates and associate’s degrees.

Last week Snyder sent a message to the college’s staff and said he was planning for the next phase of his career.

Snyder did not attend today’s meeting because he is in Warren, Mich. with President Barack Obama for the launch of the College Promise Advisory Board, a coalition to promote ideas for free community college. Obama appointed Snyder to the board.

Snyder’s new Ivy Tech contract was approved unanimously by the board and without discussion during a brief public meeting. Ivy Tech declined to release the contract until it is signed. Synder’s annual salary is $300,000. In 2012 the trustees extended his contract to mid-2017.

Paula Hughes, Ivy Tech board chairwoman, said details on a presidential search committee will be announced in the coming weeks.

“Tom has been a tremendous force for good at Ivy Tech,” she said after the meeting. “We have really moved, progressed forward by leaps and bounds during his tenure. It’s going to be big shoes to fill.”

Hughes said it’s essential that the next leader continue to bridge the academic and business worlds and find a way to maintain the statewide campus network. Ivy Tech has become a source for much of the state’s workforce development.

In the past year Ivy Tech has faced scrutiny over declining enrollment and low graduation rates. Lawmakers reacted during the past legislative session by blocking funding for capital projects and ordering a review of academic programs.

Less than one-third of Ivy Tech students complete a degree within six years, according to the Indiana Commission for Higher Education.

Snyder has maintained that most Ivy Tech students juggle family and work obligations while attending class part-time and that leads to graduation rates far different from the state’s four-year colleges. Only about 6 percent of students are enrolled full-time.

“On time completion is part of our mission but it is not our student body,” Snyder told WFYI last month during an interview. If students enrolled without the need for remediation and took a full-load of courses, he said, graduation rates would be higher.

Snyder has pushed for changes in the college to increase retention and completion, such as reshaping math courses to be more connected with a student’s major. Snyder has said students graduating high school without a mastery of algebra have struggled at Ivy Tech.

The college estimates 110,000 students have earned a degree or certificate in the past eight years.
Earlier this year when Obama visited Ivy Tech to promote free community college, he called the college “one of the best in the country.”

Yet enrollment of full-time equivalency dropped by 25 percent in the last three years, the biggest drop among the state’s colleges. In fall of 2011, more than 110,00 students took at least one class — an enrollment surge brought on by the recession. By last fall the individual headcount had fallen to 91,000.

The Indiana Commission for Higher Education is currently assessing academic programs at the college and will make recommendations to eliminate or restructure the offerings.
The college was also the state’s only public higher education institution to not receive funding for major construction projects.

Noblesville Republican Sen. Luke Kenley, an architect of the state’s two-year $31 billion budget, said that decision was based on the falling enrollment and graduation rates.

One of college’s most successful programs has been dual credit for high school students. Last year enrollment reached an all-time high with 52,908 students. The college said that students who take these course that can be transferred to two- and four-year colleges will save $40 million in tuition costs.

Ivy Tech was originally called Indiana Vocational Technical College when it was founded in 1963. Vincennes University forged a partnership with the college in 1999 that lasted for about six years. Ivy Tech renamed itself when it was recharted as a single network of colleges.