As kids all over the country head back to school, the U.S. Department of Education wants to come along for the ride. 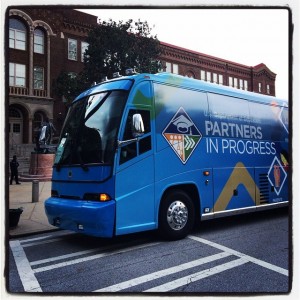 Federal Secretary of Education Arne Duncan and senior Department officials launch their sixth annual back-to-school bus tour the week of September 14. The team plans to make an eleven-stop, seven-state tour across the Midwest – and the route will include two stops in Indiana.

The bus will dock at Purdue University in West Lafayette, followed by a stop at Crispus Attucks High School in Indianapolis. Exact dates and times will be announced through email updates and the department’s social media accounts.

This year’s theme is “Ready for Success,” which will bring attention to how states and local communities are working to increase access and opportunity from early learning through to the college level. Along the route, Duncan and his colleagues will host events “highlighting the progress and achievements of educators, students, families and leaders in expanding opportunity for students throughout the nation.”

The USDOE recently granted Indiana a three-year extension for the state’s No Child Left Behind waiver, as well as more than $300,000 to help cover the cost of AP tests for the state’s low-income students.