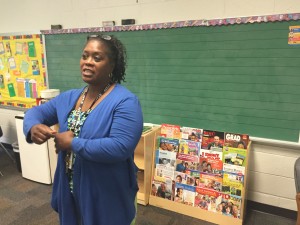 The first huge milestones of a kid’s life, crawling, walking, and talking, are often cultivated by their parents. But often, once a child enters school full time those milestones shift from the living room to the classroom.

A teacher takes on the responsibility of helping a child master reading, counting and various motor skills.

But educators recognize parents are vital to a child’s education, and now there is a push in Indiana preschools to engage parents as a lead teacher in their child’s life.

Creating A Connection With Parents

The countertops in Darlene Miles’ office are covered in stacks of handouts. Each with encouraging messages for parents or lists emphasizing skills the preschoolers should master during the year.

Miles passes out these handouts like you might business cards. As the Parent Involvement Educator at Francis Bellamy Elementary School, a preschool center within Indianapolis Public Schools, it’s her job to get parents into the schools and give them the tools they need to help their child with their education.

Every school in IPS has someone like Miles who works one on one with parents.  It’s a program that’s been in place in the district for 20 years.

“So we go over all the basic stuff, the ABCs the 123s, learning how to do the buttons and zippers and the social skills,” she says.

“I’ve had a couple parents that come in and sit down and just wanted to vent.”
—Darlene Miles, Parent Involvement Educator, Francis Bellamy Preschool

But as much as Miles’ job is about assisting parents in helping their kids academically, it’s equally about being there for the parents personally.

Miles helps parents look for jobs, food or housing, and, quite often, just sits and listens.

“I’ve had a couple parents that come in and sit down and just wanted to vent and talk and it was very soothing and very comforting,” she says.

The point of the program is two fold: IPS wants parents to feel comfortable coming to the school to discuss academic issues about their child, but it’s also a place for them to address other struggles in their life, because if they can’t provide the basic needs for their children and families it will be harder for the child to succeed academically.

To make the parents aware of her services, Miles’ organizes monthly events and workshops for both kids and parents. Some of the workshops include healthy eating seminars and car safety demonstrations, but they are also events where parents and children do crafts or eat meals together.

Making parents feel welcome in a classroom early in their child’s academic career is critically important, according to Kent Mitchell, Director of Outreach at Early Learning Indiana.

“We know parents are a child’s first and best teacher, and too often educational institutions don’t fully engage them and tap into their potential to help their children advance academically,” Mitchell says.

That’s why Early Learning Indiana is working with On My Way Pre-K, the state’s first preschool scholarship program for low-income families, to engage parents in a way similar to what IPS and Miles have been doing for years.

With the help of IU’s Early Childhood Center, the agency is training a group of Americorps volunteers that will be based at On My Way Pre-K providers in Indianapolis, Fort Wayne and Evansville. Mitchell says the volunteers will create resources based on what the parents in that school need, which could be things like take home activities or formal workshops. 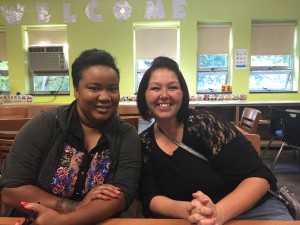 Parents Camelia Smith and Stephanie Hoskinis visit the Parent Involvement Center at Francis Bellamy Preschool, where both of their daughters just started a few weeks ago. Both moms have met with Miles already to get ideas for doing academic activities at home. (photo credit: Claire McInerny/StateImpact Indiana)

“So if you want to better know how to read to your child at night, or a different skill that will help them succeed and be ready for kindergarten, how do you help them transition to kindergarten in the future?” Mitchell says. “They can come, maybe take half an hour, an hour, learn to do that.”

A plan to engage parents was not part of the legislation that created On My Way Pre-K, but Mitchell says Early Learning Indiana recognized the program wouldn’t be successful if someone wasn’t actively engaging the child’s family.

“Having a family space or environment in a program can actually be one of the most powerful things you do because it attracts the parent to the program and they realize it’s not just for the child it’s for them,” Mitchell says.

Not Leaving Parents Behind

These events help parents build on what their children are learning and not feel like they’re losing the reigns over their child’s education.

“[She’s] picking up things fast,” says Camelia Smith, whose four-year-old daughter, Zania, started preschool at Francis Bellamy a few weeks ago. “I took her to a doctor appointment, and she was like my name is Zania Smith and my birthday is June 26. I was so shocked, and I was like ‘who taught you your birthday?’ and she was like ‘my teacher.'”

To encourage On My Way Pre-K parents to be a part of this kind of progress, the Americorps volunteers will be based in the pre-k centers. That will give them face time with parents, and Miles speaks from experience when she says that is the key to building trust and establishing relationships with parents.

That could especially benefit someone like Smith who is still a little hesitant to let go of her baby girl.

“When I first sent her to school I was nervous myself and especially for her, because at home when something happens you can comfort them,” Smith says.

And Miles says as students age that relationship becomes even more important. The parent involvement program in IPS works with families until a student graduates high school, but she says many families aren’t open to the idea of the school reaching out or offering to do home visits.

“In time past they think we are Child Protective Services investigators or something like that and they are not very welcoming,” Miles says. “But they’re getting better to receiving you if you have a specific reason to go to their house, they’re more open to come and let you in.”

Which is why both the IPS program and the effort from Early Learning Indiana focus so heavily on preschool parents, so that from the very beginning parents understand the motives and benefits of working closely with teachers.

The On My Way Pre-K volunteers are expected to begin their work sometime next month. One of the goals is getting parents involved early and building on that relationship every year until their child graduates.