Students in five Indiana school districts will have an increased focus on languages thanks to a new pilot program soon to be underway.

Along with the 25 other school-related laws approved during this year’s “education session,”  the Indiana General Assembly approved a Dual Language Immersion Pilot Program. The state Department of Education announced Thursday the five schools that will take part this school year, the program’s first:

The pilot provides schools grant money to either establish or expand existing dual language immersion programs, beginning in Kindergarten or first grade, in Mandarin, Spanish, French or any other approved language. The legislature set aside $500,000 to cover each year over the two-year span of the project. 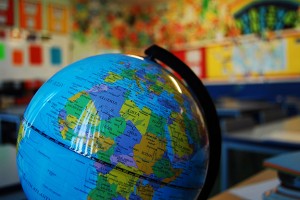 Funds are to be used for salaries, stipends, training, professional development, teacher recruitment costs, and acquisition of instructional materials.

In order to participate, schools must provide 50 percent of program instruction in English and the other 50 percent in a second language.

State superintendent Glenda Ritz says she’s eager to get the venture up and running.

“Programs like this offer students the opportunity to learn in an environment few Hoosiers get to experience,” Ritz said in a statement. “[These] grant recipients have created innovative and sustainable plans to broaden the horizons of their students and I look forward to working with them on these important programs moving forward.”

“The immersion program will fit very well into our local community due to our strong global industry. This academic offering will provide parents and students another choice in the robust curriculum offered in the WCS curriculum.”

This pilot is the first of two initiatives that will increase focus on dual language learning across the state. Senate Enrolled Act 267 also called for the IDOE and State Board of Education to establish a state certificate of biliteracy. Staff for both groups began work on that project following the board’s June meeting.

Sen. Dennis Kruse, R-Auburn, who authored the bill, says it could help Indiana graduates as they enter the job market.

“When people learn a second language fluently, you actually become a smarter person,” Kruse says. “You score better in your other classes. You end up becoming a more successful person.”

Language immersion appears to be increasing in popularity across the state. As we reported this spring, former Pike Township principal Mariama Carson plans to open a dual language charter school in the Indianapolis area next year.

Until now, only four such programs have existed in Indiana.