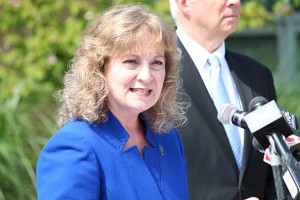 State superintendent Glenda Ritz is teaming up with her former gubernatorial adversary John Gregg to encourage voters to address the teacher “crisis” that’s been a popular topic of discussion and encouraging voters to keep education in mind when voting for governor in 2016.

Indiana schools are facing a crisis.

Our schools can’t hire the teachers they need because Governor Pence has been working to undermine public schools and educators almost since the moment he took office.

This collaboration comes just a little over a week after Ritz exited the gubernatorial race, saying instead she will focus on her re-election as superintendent.

Many said her dropping out of the governor’s race and putting her education experience behind Gregg would help the Democrats in the election. Here’s Andy Downs of the Mike Downs Center for Politics explaining this on last week’s Indiana Newsdesk:

The other Democratic challenger, Karen Tallian, dropped out of the race Monday, leaving Gregg currently as the only challenger to Pence.