The “education session” was dominated by a lot of talk about money – discussions that have continued into the school year.

The Indiana General Assembly approved a significant shift in the state’s school funding formula, which made up a big chunk of the state’s new two-year budget. Another smaller part of that budget skated by relatively unnoticed at the time, but is now attracting much attention from the State Board of Education.

The board approved the eligibility requirements and application process for a new charter school grant and loan program at their regular business meeting Wednesday on the IU-Bloomington campus.

As we’ve reported, this initiative – approved as part of the newest biennial budget during the 2015 legislative session – consists of two parts: 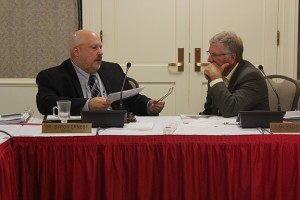 Charters are eligible for both programs if they are in their first two years of operation, located in an innovation network or if they serve a population that is mostly made up of students with developmental, intellectual or behavioral challenges. “High-performing” charters (those earning an A, B, or C on the state’s school grading scale) automatically qualify, but those earning a D or F are only eligible if they perform as well as or better than the nearest non-charter public school.

Money is specifically not available for virtual charters, adult high schools, charters who won’t be serving students in the fall of the application year and those that have not been placed in the same or a better category than the nearest non-public charter for two consecutive years.

State legislators set aside $50 million for both programs over the next two years. John O’Neal, Government Relations representative for the Indiana State Teachers Association, told the board he’s worried about that amount, which he considers quite a large allocation for just one sector of the state’s school system.

Some board members expressed concern about what state superintendent Glenda Ritz called “an inequity piece that needs to be addressed”: the difference in the interest rate afforded charter schools through this loan program (one percent) and the interest rate tacked onto loans traditional public schools receive through the Common School Fund, which is closer to four or five percent.

“This is a public to public transaction, with public dollars, and [it’s interesting] to think about what that cost of capital is for the school district,” board member Vince Bertram says. “The difference between the Common School Fund and this particular loan program is something that I would be interested to understand.”

Other questions were raised over how to prioritize who gets what grant money if enough people apply and requests reach the $50 million mark. State Board staff said they plan to come back at the September board meeting with recommendations, once they are able to gauge interest from schools.

State board staff says they hope to finalize and release those applications by the end of the week.

The State Board will accept applications for loans from qualifying schools received between September 15 and October 15.