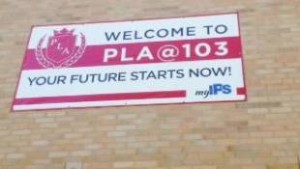 The principal who was set to launch a pivotal elementary in Indianapolis Public Schools has been replaced by the former leader of a shuttered city charter school a month before classes begin.

Marlon Llewellyn had been preparing the first IPS “innovation” school —the former Francis Scott Key Elementary School 103 on the far east side. The school will open in August as a Phalen Leadership Academy and is the anchor of a major philanthropic investment effort headed by the Glick Family Foundation, United Way of Central Indiana and IPS.

Llewellyn was picked last year by education reform group The Mind Trust to co-develop the school with Earl Phalen, the CEO of the Phalen charter school company, and given a $100,000 fellowship. The two were later approved by the IPS school board to open the the first school in the district under a 2014 law that lets IPS hire an independent management team to run a school without the constraints of the district’s teacher union contract.

“Yes, Marlon has done a great job during his fellowship year but will not be leading us forward as the school leader next year,” Phalen said in an email Thursday. Phalen has not responded to requests for further clarification as to why Llewellyn was removed.

Llewellyn did not respond to a request for comment.

Now Agnes Aleobua, former principal at Fall Creek Academy, will take over leadership of PLA School 103 when it opens Aug. 3.

Fall Creek Academy was closed at the end of the recent school year due to academic failures. The school’s charter authorizer, Ball State University, did not renew its charter. Back in January when the closures were announced, Fall Creek Superintendent Charlie Schlegel said “progress did not occur quickly enough” to keep the school open.

Aleobua is a former Teach for America teacher and is in the process of obtaining a master of arts from Columbia University in education leadership, Phalen said.

Phalen said Aleobua was picked for her past accomplishments. She has overseen increases in math and English pass rates and academic growth as the Fall Creek Academy high school principal and at the University Yes Academy in Detroit, according to Phalen.

IPS board member Gayle Cosby has been critical of The Mind Trust’s partnership with IPS and voted against partnering with Phalen Academy because it has yet to receive a grade on the state’s A-F accountability scale.

Cosby said she was unaware of the leadership changes before being contacted by WFYI Sunday.

“I am disappointed at the timing of this announcement, which means that the $100,000 Mind Trust incubator funds as well as the preparation time was wasted on an individual that will not ultimately lead the school,” she said. “I am also disappointed in the fact that the replacement for Mr. Llewellyn was previously the leader of a charter school which was shuttered due to poor performance. This inconsistency and lack of transparent communication solidifies my opinion that this partnership is a bad idea.”

IPS Superintendent Lewis Ferebee could not immediately be reached for comment Sunday.

Phalen’s contract with IPS allows the charter school company to manage how it spends funding and hire its own teachers. The contract also allows the IPS Board to close the school because of poor academic performance.

PLA School 103, as it is now known, is the center of the Far East side Success Initiative — a plan to provide birth to tuition-free college for Far East side residents who attend the school and live in the Carriage House East apartment complex. Details are still scant about the plan but the Glick Family Foundation, among other local groups, is expected to spend millions of dollars.

Llewellyn was was the only one out of three recipients of The Mind Trust’s initial round of $100,000 innovation school fellowships in 2014 to launch a school. The fellowships are intended to develop unique curriculum for failing IPS schools that the district board can chose to approve.

Heather Tsarvaris, a former U.S. counterterrorism analyst, sought to idea to create a middle school for  entrepreneurship. She is no longer in the program.

Lauren Franklin planned to develop an IPS boarding school but has since taken a job as principal at Crispus Attucks High School because the costs of opening a school were too much.