This is the first in a series of stories about Arlington Community High School’s transition back to the Indianapolis Public School district in the 2015-16 academic year.

Today Arlington Community High School officially becomes an Indianapolis Public School — again — three years since the state took control of it due to chronic failure and hired a charter school company to run it.

The company, Tindley Accelerated Schools, has faced criticism for its hard discipline and high dropout rates — but changed the school’s culture from one of chaos to safety and instruction. In 2012, the school had been graded an F by the state for six years because of low test scores. It remains an F today.

Now, the question for many in the community is: can IPS remake Arlington into a new, succesfull 7-12th grade school despite its past? 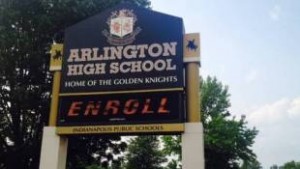 That’s what student Christian Smith worries about. But he’ chosen to stay at the Northeastside campus for his senior year and become an IPS student again.

The Arlington basketball player hopes other classmates who follow suit, can influence IPS staff and new students in the Tindley-way — that means: no violence, no shenanigans and a serious focus on learning with an eye toward college.

“Probably be like a little shift but I am pretty sure it is going to be pretty much the same people that have been going here the past four years, so we are accustomed to how Tindley ran,” Smith said about his expectations for next school year. “So we are just going to keep it same, I feel like. So that is why I am staying.”

But IPS officials don’t yet know how many current Tindley students will stay at Arlington for the 2015-16 school year. They hope to double Arlington’s enrollment to 600 students, including adding around 300 new seventh graders from feeder schools.

And it remains to be seen how students will gel with new principal Stan Law, former principal of Shortridge Magnet and Broad Ripple high schools.

That’s because some students worry Tindley’s culture of “no excuse” discipline and academic expectations will vanish when IPS takes over again at Arlington.

Arlington students WFYI spoke to for this story agreed that safety is paramount concern — and under Tindley’s watch they say the relief of not worrying about violence allowed them to focus on class. They fear the assaults and other fighting reported the past year at IPS high schools Northwest and George Washington could manifest at Arlington’s vast campus.

But the quality of teaching is a concern too.

“I don’t think they are going to take it as seriously as Tindley is because (Tindley) are more accelerated than IPS schools,” she said.

Both students agree they’re holding on to stereotypes about IPS but remain unmoved in their fears.

A year ago, Tindley CEO Marcus Robinson shocked the community when he told the State Board of Education that Tindley could no longer afford to run Arlington for the 2014-15 school year unless it received an additional $2.4 million in aid.

The company had signed a five-year contract with the state board to run Arlington.

IPS Superintendent Lewis Ferebee stepped in and offered in-kind relief for Tindley that kicked off the unlikely discussions that the district might regain control of Arlington.

Enrollment plummeted when the company, known as EdPower then, took control of the school in 2012 as students and the funding linked to them left for other IPS high schools. Nearly a 1,000 students transferred out of Arlington since IPS ran it in 2011-12 school year.

Only 317 students attended Arlington this past school year.

The cost of running the 380,000-square foot school was too much for the nonprofit, Robinson said. Last month Robinson cut a $23,000 check to cover just 30-days of electricity for the building.

The upheaval forced state officials to rewrite how school intervention works by building in more support for troubled schools before the state would consider a takeover.

But Robinson still believes the state can fix a failing school if it’s funded properly and students are prevented from fleeing to another school.

“What you want to do is change the lives of these kids, not take over a building,” he said recently.

Robinson also believes groundbreaking advances could happen at Arlington if the school — with its vast wings and courtyard — became a K-12 center. And not just another high school.

“It’s just the right place to create a new model for urban education that isn’t a thousand poor teenagers who are struggling with underperformance, who are struggling with being underskilled and trying to make life kinda happen,” he said. “So under the circumstances I think there is a way forward that is better. I am afraid that might not happen (at Arlington).”

Yet, Robinson is confident that new Arlington principal Law is the right educator to rebirth the school.

There is the unmistakable feeling here that Tindley students and staff fear their advancements — no matter how small — will be forgotten or never even recognized when IPS takes over.

Graduation rates remain dire — just 43 percent of students graduated in four years in 2014 but all did so without a waiver. Yet 30 percent of seniors dropped out of school.

But Robinson maintains strides were being made by Tindley. Students who didn’t graduate in four years — needed Seventh graders at Arlington were passing at a rate of more than 50 percent — an increase of around 30 percentage points from when IPS ran the school.

“But that is still an F, though,” he said. “That doesn’t make us proud or happy and doesn’t mean the work is done, it just means we are on a road toward some success. I’d say our experience at (other Tindley schools) is similar … in the first two years of Tindley we were 30 percent, 40 percent pass.

“I think that is story of any school on that journey.”

Outgoing Principal Alicia Hervey agrees. As she walks down the hall on the last day of school last month, she says some people don’t realize how much Arlington’s culture has changed.

The hallways are empty because the students are in class.

“People would have thought five years ago there would have been kids everywhere — there is not a student in this hall. We really take that seriously, right? But people’s perception of Arlington is not this. People’s perception is that — it’s crazy, it’s out of control. That is what is frustrating”

When A-F grades come out for this school year, Arlington will likely again be an F, Hervey says.

But what that grade won’t show is how Tindley has driven students to succeed. That change — illustrated by two students here — is one she hopes won’t disappear with IPS.

Even as Arlington returns to the IPS district, it remains under state intervention.

Arlington is one of four IPS schools that have entered state takeover. The three others are Emma Donnan Middle School and Manual and Howe high schools. The Florida-based Charter Schools USA runs those.