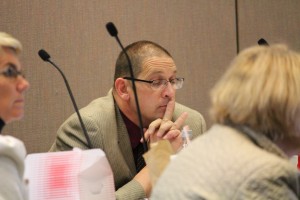 Troy Albert is one of the State Board of Education members the governor did not reappoint to the board Wednesday. (Photo Credit: Rachel Morello/StateImpact Indiana)

The new roster comes as a result of legislation the General Assembly passed this session permitting the governor and two legislative leaders to appoint or reappoint INSBOE members by June 1. The governor previously had authority to appoint all members of the board as spots became vacant, never all at once.

But after months of disagreements and arguments on the board that led to a walkout by Ritz, stalemate on important policy decisions and a lawsuit, the legislature decided it was time to reboot the board.

“Today marks a fresh start for the State Board of Education,” Pence said in a statement. “Ensuring a quality education for every Hoosier student remains of the utmost importance to our administration, and I commend the tireless efforts of the men and women who have devoted their time and expertise by serving on the Board.”

“Hoosiers can be assured that the individuals appointed today to the State Board of Education bring to the table a wealth of unique educational experiences and remain wholeheartedly committed to serving our kids, our families, our teachers, and our schools,” Pence said.

Over the last two years, the INSBOE adopted new academic standards, revamped the state’s standardized assessment and created a new A-F accountability system – but that doesn’t mean this new board will not have plenty to do.

Board spokesman Marc Lotter says his staff will immediately begin reaching out to the new members to help prepare them for their first meeting June 3. Lotter says the biggest agenda items facing the new group will be addressing components of the new state budget, including new funding and loan options for charter schools, as well as the board’s role in state testing contracts.

“We also have to establish the testing windows for next year,” Lotter explains. “I know that there are a lot of superintendents and principals that are really looking to get those dates so they can map out the academic year next year.”

Below, check out a visual representation of the political parties (blue for Democratic, red for Republican & neutral for Independent), professional backgrounds & district memberships of former, returning & new State Board of Education members.

Click on a district to see its board representative. To switch between the former and current board makeup maps, click on the main menu in the top left corner of the map and select “Former INSBOE” or “New INSBOE.”

The New State Board of Education

State Superintendent Glenda Ritz: The original aim of Senate Bill 1, the legislation allowing all of these new appointments, sought to remove Ritz as chair of the INSBOE and let the board choose their own chair. But following pushback from voters and Democrats in the statehouse, lawmakers amended the law to let board members choose their own chair after the end of Ritz’s current term.

Pence appointed three new people to serve on the board: 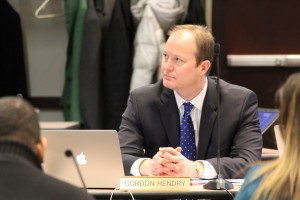 Gordon Hendry will remain on the board, and work with five newly-appointed members for the first time at the June 3 meeting in West Lafayette. (Photo Credit: Rachel Morello/StateImpact Indiana)

The governor reappointed the following members who currently serve on the board:

“Iʼm thankful for the chance to serve in this new role,” Yager said in a statement. “While Iʼve recently retired from my position with our local schools, Iʼve never lost my passion for helping students succeed. I know my fellow Board members share this passion, and I look forward to working with all of them in the days ahead.”

House Speaker Brian Bosma, R-Indianapolis, appointed Byron Ernest, the head of Hoosier Academies, a network of charter schools in the state. Ernest will not represent a specific district on the board. He previously served as principal at Emmerich Manual High School in Indianapolis, a failing school that moved out of the ‘F’ category under Ernest’s leadership. One of his charter schools, the Hoosier Virtual Academy, which is also considered failing under the state’s accountability system, recently approached the SBOE to ask the group to differently calculate A-F grades for schools that serve unique populations of students.