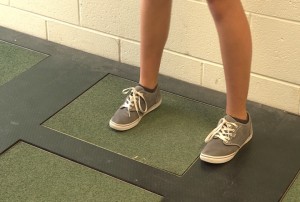 Every time someone steps on a Pavegen tile installed at Bloomington High School South, the kinetic energy from the footstep creates a few watts of energy. photo credit: Harrison Wagner / WTIU News

Bloomington High School South is the only public school in the country creating electricity every time their students walk through the hallway.

Thanks to a new installation of tiles from London-based energy technology company Pavegen, every time a student walks over the tiles, the kinetic energy from their footsteps creates a few watts of energy. Right now, that energy powers the television that displays how many watts are stored on the battery, as well as two lit display boards.

BHSS students are using the new tiles to create educational opportunities for their classmates as well as younger students. AP Environmental Science teacher and Pavegen Project Coordinator Amanda Figolah says her students have already used the tiles for science and math lessons with more than 100 elementary school students.

“They’ll actually move through stations learning about solar power and wind power. There are demonstrations at each of those stations and also just about how we produce energy now in Indiana, which is primarily coal and fossil fuels,” Figolah says. “A second piece the other rotation is working on our Pavegen tiles to experience inquiry learning.”

Figolah’s students created these lesson plans based on state math and science standards, so students create graphs and practice the scientific method by writing a hypothesis such as, “will walking or jumping on the tiles create more energy?”

The idea to purchase the tiles came after an AP Environmental Science student showcased the company during a project last year, and other students pursued the idea of installing them at the school. Earlier this school year, students wrote grant proposals and received money from Duke Energy and the Raymond Foundation to purchase the eight tiles that now sit in one of the school’s hallway.

The efforts to create lessons and educate younger students are not part of any class, but rather an extracurricular activity for the students. Many of the students involved say they aren’t learning much about science or math themselves but found other benefits to working on the project.

“I can achieve more things, like I can set my goals higher because thinking this guy in London achieved this and I could do something like that,” says freshman Brittany Underwood. “The guy who made this, he came up with it himself, and then he made it a thing and now we have it in our school.”

The setup at BHSS is the first installation of the tiles at a public institution in the United States, as well as the smallest. Tiles are also installed at Heathrow Airport and Harrods department store in London, as well as underneath the turf of a soccer pitch in Rio de Janeiro, Brazil.