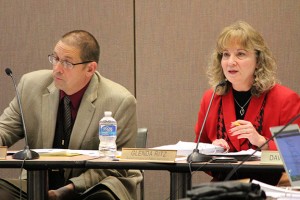 The House today passed Senate Bill 1, the measure that would change the makeup of the State Board of Education, including removing the state superintendent as chair and letting the board choose its own chair from among its ranks.

The House voted 55-41 to accept the updated version of the bill, which we outlined in detail here.

In addition to removing the state superintendent as chair of the board, it also changes the following aspects of the board:

Rep. Jud McMillin, R-Brookville, sponsored the bill in the House and says despite testimony to the contrary, the bill is not about politics.

“It is strictly about policy and getting the right policy in place,” McMillin says. “What we are considering doing here and what we are discussing here is giving the State Board of Education the opportunity to select their own chairperson and also doing some things differently with the board.”

The bill now goes back to the Senate so they can approve the House amendments. It could be sent to conference committee or if passed again there, it will be voted on by both chambers again before going to the governor to be signed into law.