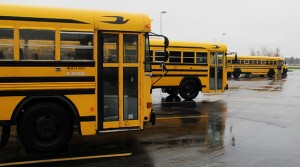 A case over whether or not families should pay busing fees in Franklin Township has made its way all the way to the state Supreme Court. photo credit: Kyle Stokes / StateImpact Indiana

The Indiana Supreme Court Tuesday upheld a trial court’s decision that the state constitution does not require school corporations to provide transportation for students to and from school.

The opinion ends a battle between parents and Franklin Township Schools over the district’s decision in 2011 to stop offering busses for students in wake of a $16 million budget shortfall.

Franklin Township Superintendent Flora Reichanadter said she does not expect schools to now drop transportation because they can. The judgement, she said, clarifies for schools what is and is not a constitutional right in public education.

“We just wanted to have the ability to resolve the whole issue ‒ if we were performing in an unconstitutional way or not,” she said. “I also think it provides clarity to school districts across the state because there are some districts, like Speedway for example, that have walk zones. It provides definition, if you have students walking to school in way to get there safely ‒ do you have to provide transportation in a climate where financial resources are limited.”

The plaintiffs argued that the education clause of the Indiana Constitution prohibits a school corporation from discontinuing transportation for students. A state Court of Appeals decision last year agreed with that and overturned the trial court’s ruling that school transportation was a constitutional right.

But in the opinion issued today, the five justices unanimously agreed Article 8, Section 1 of Indiana’s Constitution does not mandate school corporations to provide transportation.

Justice Steven David wrote that the clause makes it the duty of the General Assembly to create a public school system and its policies.

“This court has neither the ability nor the duty to establish requirements for this system of common schools, aside from determining when an action clearly violates a constitutional mandate,” he wrote.

Hoagland, the parent who lead the legal challenge, said she was disappointed in the ruling and expects to see repercussions if schools decide to reduce or discontinue transportation to save money.

“In my opinion, this opens the doors for schools to be more fiscally irresponsible with their money and now they know where they can’t cut those expenses,” she says. “Which will hinder some children from getting to school, mainly the less fortunate children.”

Franklin Township Schools hired a private company to operate its transportation. Students were charged a $20 registration fee and annual $475 fee by the Central Indiana Educational Service Center for transportation.

The district began offering transportation the next year, after the state allowed corporations to begin shifting money from their general fund to cover transportation costs.

In 2012 state lawmakers also made it illegal for parents or students to be charged a fee for transportation to and from school, but allowed fees for athletic, social and other functions.

Indiana school districts are required to give three years notice if they could cease transportation. Decatur Township, Westfield Washington and Danville Community have filed those notices.