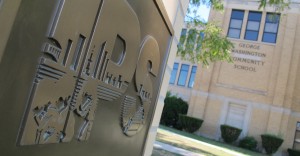 A previous version of this story included incorrect free and reduced lunch data from the Department of Education.

In Zionsville, a suburb of Indianapolis, the median household income is more than $100,000. The free and reduced lunch rate is less than four percent – the lowest in the state.

It’s also one of the lowest funded school districts in the state.

It seems counterintuitive that a school in a wealthy community is having to make deep cuts to stay out of the red, but that’s exactly what’s been happening over the last seven years.

“We lost some world languages, we lost our International Baccalaureate program at the high school level, we lost the ability to run most of our science labs for more than a year, because our class sizes exceeded the safety ratings,” says Zionsville Superintendent Scott Robison.

The district has also laid off teachers and posed multiple referendum questions to supplement its state funding. To understand why Zionsville is in this situation, you have to know how the way we fund schools has changed.

The History of School Funding In Indiana

In 2007, Zionsville got about 65 percent of its money from property taxes. Under that model, more expensive houses meant better-funded schools.

But in 2008, the state placed a limit on the amount of property tax revenue school districts could collect. And to replace that funding stream, the state developed a formula to distribute money to schools.

It can get confusing but there are really only two terms you need to know: foundation and complexity.

Foundation is the term for the amount of money the state gives a school for each enrolled student. It’s the same for everyone, so more students means more money.

For example, the state gives Zionsville just under $5,000 per student. But that dollar figure amounts to almost $7,000 in the Indianapolis Public Schools district, where the free and reduced lunch rate is 71 percent.

School districts like Zionsville have seen decreases in funding per student by almost $1,000 since the property tax caps went into place.

How The Legislature Wants To Change This

To help close the gap between districts, the legislature is rewriting the formula. It increases the amount of foundation money for each student, but dramatically cuts the complexity.

Check out the chart below to compare the amount of money per student a handful of districts will get. You can also look at their free and reduced lunch rate to compare.

For schools like Zionsville, the increase won’t get them out of a deficit and they’re still facing potentially large class sizes in the near future.

On the flip side, schools in impoverished areas will face huge cuts from the complexity changes. IPS is losing $10 million just in complexity money, and with declining enrollment they are likely to see losses in foundation money as well.

Martinsville Superintendent Michelle Moore says her district will get hit from both sides: they’ll lose complexity money and because of declining enrollment they’ll get less foundation money too.

Moore says the loss of complexity money is particularly disappointing because it raises a very important question about educating kids.

“Do we believe it costs the same to educate each child?” Moore says. “That’s a fundamental philosophical question that’s been debated in education for decades. I personally have taught in schools with children in poverty and I realized that it does cost more to educate a child in poverty.”

The goal of trying to make the system more equitable seems to only be frustrating everyone equally, and Brown says he recognizes this.

“Somebody asked me earlier, would I make everybody happy?” Brown says. “And I don’t know if I have those powers.”

The House already approved the budget, sending it to the Senate for final approval.