A report out this week finds nearly a quarter of Hoosier high school graduates were not ready for college. That’s an improvement from past years, but the state Commission for Higher Education says there is still too many students taking remedial classes at college. 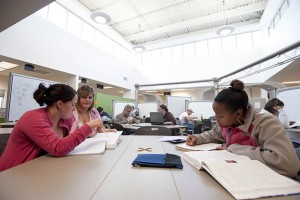 One in three students at Indiana\’s public universities requires remedial help in math or English. (SIUE/Flickr)

The annual Indiana College Readiness report is a trove of data on students’ transition from high school to college. For example, more than a third of 2013 high school graduates don’t go on to college – sixty percent of students who graduated with a Core 40 diploma did. The largest group of college bound students is the 92 percent of those who earned a Honor diploma.

Yet while nearly the same number of students earning those two degrees enter Indiana’s colleges, more than a third of students with Core 40 diploma require remedial classes in English and math.

“There’s a disconnect there between thinking you have taken what you needed to,” says Teresa Lubbers, Indiana’s higher education commissioner. “There is no one simple answer to that but the compelling evidence is that when they are not prepared they are not very likely to complete once they get there.”

Lubbers says colleges and high schools are working closer together to narrow these types of gaps. She adds that Indiana’s new K-12 academic standards and a review of high school diplomas will help.