Indiana’s State Board of Education approved initial rule language for a new A-F school accountability system during their January meeting. This week, they traveled the state to gauge public reaction to the proposal.

Beginning Wednesday, held hearings in Evansville, Marion and Indianapolis. Board Director of Accountability Cynthia Roach says the panel generally heard the same concerns at each meeting.

We’ve already told you a bit about how the system would change if this proposal gets approved – but let’s pick out the items Roach is talking about: 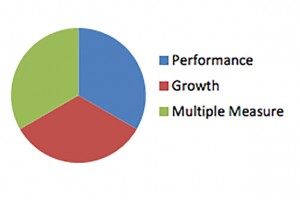 For a more detailed explanation of how each domain is calculated, see pages 3-7 of the proposed rule language. If you’re a visual learner, check out this calculation chart from the IDOE website.

At the board’s meeting Friday in Indianapolis, John Ulbright, a math instructional coach with MSD Wayne Township, told the board that growth opportunities need to be equal for all students, regardless of how they performed in the past. He sees this as a potential problem for his district where, like other urban schools, high student turnover is typical.

“If you get a large batch of students who have been moving from school to school – and probably likely to have not succeeded at some of those schools in the past – if you had a ‘did not pass’ score, then I can’t get the same amount of growth points as maybe another school that’s inheriting a large number of ‘pass plus’ students,” Ulbright explains. “When you teach particularly in an urban setting, you have to know that whatever growth you get out of your students is going to be recognized and valued, and the way that we view this particular model is that the growth of some students is valued significantly less than the growth of other students.”

Judy Stegemann, chief academic officer in Wayne Township, agrees, adding that an A-F model should fuel a system for improvement.

“I think this model inherently has things built in it that does not drive or encourage growth and improvement both equally,” Stegemann says. “It overrates performance and underrates growth. Because of that, the opportunity that drives people – the opportunity to achieve and grow – is not being acknowledged.”

EVSC Chief Accountability Officer Katie Minihan said that before a model is adopted, she wants to know the correlation between growth and performance. Another one of Minihan’s concerns is that the new model still fails to adequately reflect performance of alternative schools.

“It seems wise to do trial runs with the data to investigate the impact,” she said. “Because it’s possible the new ISTEP data could show an even higher correlation between growth and performance. … If Indiana is truly interested in a model where growth and performance show low correlation and are independent in their relationship, then a model where the same number of points is awarded in each growth category regardless of previous performance is the better option.”

Turnout was fairly small at each of the three public meetings – at least relative to regular attendance at monthly state board meetings. But anyone may still submit comments about the topic on the State Board’s website. Board staff say they’ve received about nine or ten online comments since they opened the online form February 3. That will remain open until March 13.

“The online comments will be given much weight because we know it gives people a chance to think through exactly what it is that they want to say,” Roach says.

Roach and Debbie Dailey, director of accountability for the Department of Education, will compile all the comments and form any recommendations they may find from that material. Roach says they hope to present those suggestions to the board during their April meeting.