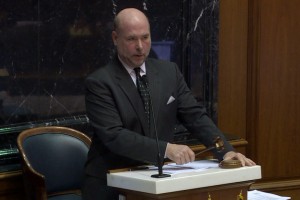 Governor Pence tonight signed into law the bill that shortens the length of this spring’s ISTEP+.

This comes after the Indiana Senate and House of Representatives passed the bill Monday allowing the Department of Education to take certain measures to shorten this year’s ISTEP+ test.

After outrage from parents and educators that this year’s assessment would take students a total of twelve hours, the General Assembly took the reigns to trim the length of the test. Both chambers passed a joint resolution last week promising to get the bill passed, so the IDOE could start enacting measures suggested by outside consultants to cut three hours and five minutes from the test.

By passing Senate Bill 62, the legislature gives the IDOE permission to eliminate the Social Studies portion of the ISTEP+ exam for fifth and seventh graders this year (subtracting about an hour). The bill also enables the IDOE to reuse pilot questions on next year’s test, rather than releasing them to the public – another time-saving measure.

With the approved changes, the new test will take around eight hours, which is on par with other states’ assessments.

IDOE spokesperson Daniel Altman says his organization is working with schools to administer the updated test.

“We’re doing quite a bit of communication with schools just letting them know the sort of nuts and bolts of how it is this ISTEP+ administration will work, letting them know which sessions they have to administer, which ones they don’t, so we can make this run as smoothly as possible,” Altman says.

Schools are allowed to begin administering the ISTEP+ as early as Wednesday.