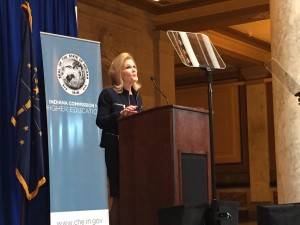 Indiana is the first state selected to participate in a study with national research company Gallup to survey recent college graduates from universities around the state and gauge the effectiveness of their degree.

The survey is based on the Gallup-Purdue Index, which surveyed 30,000 students nationwide about satisfaction with their college degree after graduation. The Index released its first report in 2014, showing that students who had a mentor or felt their university was engaged in their learning were more engaged in their job.

Lubbers says she hopes this tool will help higher education institutions and employers learn what young people need to be prepared for the current workforce.

“It’s a matter of getting people to understand that the world in which they grew up in is not the world in which people are now growing up in,” Lubbers says. “It’s really a matter of getting people to understand what the world of work looks like. There are no jobs in advanced manufacturing for people with an eighth grade [diploma], or very few with a high school diploma. It’s an education process to change a culture.”

Chuck Johnson is the provost at Vincennes University and says the survey tool will help inform the rest of the state something his university already knows: educating Hoosiers is not just about four year degrees, but also about closing the skills gap and providing a variety of educational opportunities.

Johnson says VU has a variety of hands-on programs that keep students in the classroom a few days a week, and in a plant or other manufacturing center the rest of the week so they can learn on the job and make money. He is excited for another way to hear from students regarding their experiences with these programs.

“We’re always looking for good information to help us get a better sense of what has been value-added, what we’ve done that could be improved, how we can make our programs better and how we can help our students be more successful when they leave Vincennes University,” Johnson says.

USA Funds and Gallup will fund a portion of the project, allowing the state to offer a discounted rate for colleges that sign up before June 30.