Following a week of confusion and anger over the spring ISTEP+, the State Board of Education meets Friday morning to discuss how they can shorten the test students will take in two weeks. 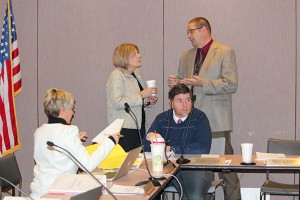 After the Indiana Department of Education released test timetables to schools in early February, school leaders and parents expressed concern about the extended length of time students would need to sit for the exam – in some cases, double or triple the amount of time they’ve tested in previous years.

State superintendent Glenda Ritz called this special meeting of the board in response to that outcry. The IDOE also released a resolution she sent to board members suggesting possibilities for improvement. Among the highlights, Ritz recommends:

In his own response to concerns, Governor Mike Pence issued an executive order Monday hiring two outside consultants to recommendations for shrinking the test. Despite seemingly placing the blame for test issues on state board relations with Ritz and the IDOE during his press conference Monday, Pence said Wednesday that he had every confidence the groups could work together to fix the ISTEP+ before students sit for the first testing window Feb. 25.

The board will meet beginning at 9 a.m. Friday.