It’s been six years since businesses suffered from the country’s worst financial crisis since the Great Depression. Now that the economy is back on track, some employers say they can’t fill jobs fast enough.

President Barack Obama is encouraging colleges and universities to acknowledge the need and find a way to help fill it. Pushing that message was one focus of his trip to Indiana last week.

“We want to make our community colleges even better and more responsive, and more attuned to what’s going in the marketplace,” Obama told a crowd at the Indianapolis campus of Ivy Tech Community College last Friday. “The reputation of the school is going to be determined by, when the graduates come out, do they have the skills they need to do the job?” 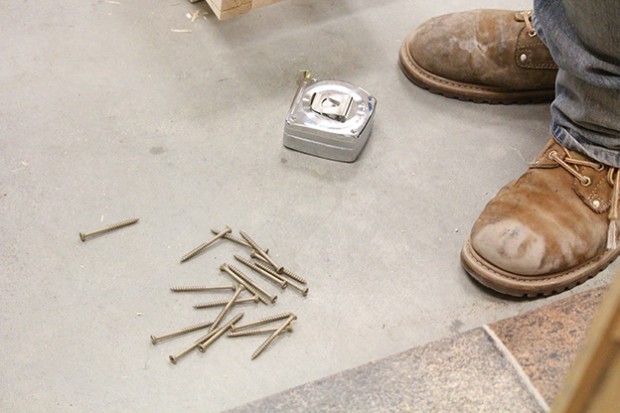 After a few years of rough economic waters, the job marketplace is finally improving.

According to figures released by the Labor Department last week, employers nationwide added just over 250,000 new jobs in January. Since Nov. 1 of last year, American businesses have hired more than one million new workers – the best numbers for any three-month period since 1997. The New York Times reports that more jobs were created in 2014 as a whole than any other year since 1999.

As the supply of new positions has increased, the demand for skilled workers has, too.

That’s where the need for technical training comes in. President Obama is making investment in job-based education a big part of his budget proposal for fiscal year 2016. In the plan he sent to Congress last week, he asked for:

The White House says these requests would focus on helping workers gain the skills to work into growing fields with significant numbers of middle-class jobs that local employers are trying to fill, like energy, IT and advanced manufacturing.

“One thing that we do have to think about…is making sure that we’re reaching out to businesses and finding out what do they need for the positions that they’re hiring, and having those businesses help community colleges design training programs and departments, to serve those needs,” Obama said in his Ivy Tech address.

The support will also help community colleges become more job-driven. The president is throwing a lot of support the way of community colleges this year – particularly through his proposal to make the first two years free for all students.

Right now, about 12 million college students and 94 percent of high school students across the country receive some form of career and technical training, according to the Association for Career and Technical Education.

Drilling The Basics At Ivy Tech

Ivy Tech is ahead of the game. At the school’s North-Central campus in Elkhart County, one skills training program in particular already follows the exact blueprint Obama has set forth for schools to follow.

The RV Industry Production Associate program is a $50, one-week course that trains students for entry-level RV manufacturing jobs. The course, which just wrapped up its first session last week, gives students the opportunity to participate in basic hands-on training, tour local factories, and – at the end of the week – even interview with representatives from one of three area RV companies sponsoring the program.

Prior experience isn’t required – in fact, 12 of the 16 students in the inaugural session told instructor Mark Hoeflinger that they had never done any type of manufacturing work before.

“They’re coming along pretty well,” Hoeflinger said on day four.”The RV companies are having a hard time finding people who can do just easy work – motor skills with their hands, use power tools, and so that’s how I designed this class, was to give them experience using…all those tools, so they get the repetition.” 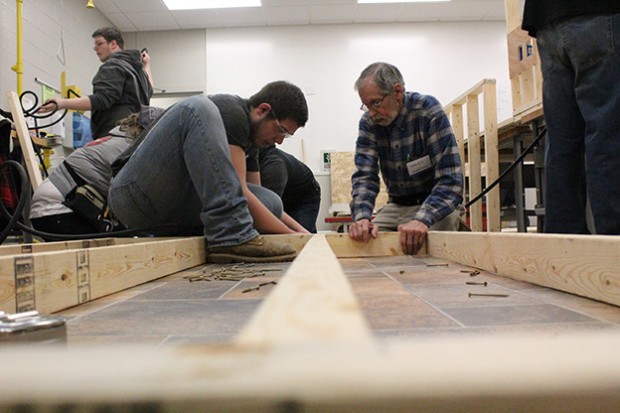 RV companies rule Elkhart County. Eighty-five percent of all the trailers, campers and mobile homes built in this country are built in the northeast part of Indiana. It’s the biggest industry – and therefore the largest employer – in the area. That’s why Julie Foster, Ivy Tech North-Central’s campus president, says it was the perfect industry to target with the school’s first technical training program.

“When things are good for the RV industry, it’s good for the county,” Foster says. “Because most of these companies have been here for years and are family-owned, there’s a lot of commitment amongst the leadership of those companies to really develop the workforce here so that the next time the economy takes a dip, we can handle it.”

Foster says the program has benefits for all parties: local companies get skilled employees, and Ivy Tech is able to send graduates straight out of the classroom into the workforce.

“We’re here because the community sees a need for advanced training beyond the secondary level,” Foster says. “It doesn’t do us any good to create a program where there’s not a need for it out in the community, where students can ‘t go out and get a job”.

And jobs are what students, like 26-year-old Brittany Wade, come to Ivy Tech looking for.

“The program that they have set up looks like something that’s going to be helpful for us in finding people that have at least some prior training, some knowledge of the RV industry, know what they’re getting into,” Pitman says.

But knowledge isn’t the first thing Pitman says he looks for in an employee – he’s most concerned with what some would call “soft skills.”

“The main this is are they going to show up everyday?” Pitman explains. “We look for people that have a good work ethic, that can work as part of a team.” 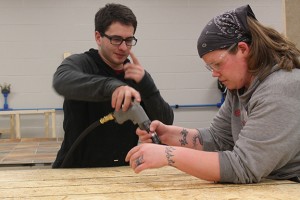 In between sawing wooden planks and assembling parts, those are skills Ivy Tech’s RV students are honing. On this particular day, the class is divided into groups of two or three, each working to construct a portion of what will come together to be an exterior RV wall.

The most successful groups are communicating. Twenty-year-old Riley Sullivan and his partner Arnold Dorey, 76, have most noticeable gap in both age and experience – but they put their portion of the floor together quickly because they continually ask questions of one another and make suggestions when the other looks confused.
“We’re learning from each other, getting better pointers, understanding how to do it a little bit more efficiently,” Brittany Wade says. “[The instructors] told us that it’s a lot about teamwork in the factories. You have your set thing that you do on your unit, and if you don’t do it correctly, you have to go up to the front of the line where it got stopped, and then you get behind on your work.”

Looking to the Future

The hope is to expand this program to service other local RV companies, and ultimately to drum up enough support to build a Workforce Training Center on campus. That way, Ivy Tech can expand into more industries with the help of other community partners.

That’s something else the Obama administration wants. In his budget request to Congress last week, the president asked for money to create 100 new job centers around the country.

Technical training isn’t something Julie Foster says is necessarily encouraged – but it is needed.

“Everybody’s ‘oh, go away to college, go to a four-year school,'” Foster says. “That’s not really for everybody, it doesn’t get them excited. And quite honestly, we need people who can do things.”

Brittany Wade has never been to college – but she’s considering registering in the fall for culinary school. In the meantime, the certificate she’ll get when her session of the RV program ends this week will help keep her on her feet.

“I would like to look for a job in the RV industry. Either that, or even the skills that we’re learning, they could benefit in construction,” Wade says. “I’m restarting.”

Wade adds that with the skills she’s learning, she’s confident she – and any of her classmates – could walk into a local RV company next week and land a job.