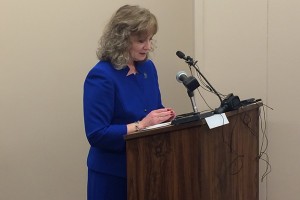 A bill in the House would allow State Board of Education members to elect their own board chair. Current state superintendent Glenda Ritz testified before House Education Committee Thursday against the bill. (Photo Credit: Bill Shaw/WTIU)

The House Education committee voted 8-3 Thursday in favor of a bill that would change who serves as leader of the State Board of Education.

The committee heard testimony regarding House Bill 1609, which would allow the State Board of Education to elect its own chairperson rather than having the state superintendent automatically hold that position.

The bill would allow Glenda Ritz, the current state superintendent, to remain on the board, but the board would elect its own chair from within its ranks.

Rep. Jud McMillin, R-Brookville, authored the bill and says this measure would help dissolve some of the dysfunction between the SBOE and Indiana Department of Education.

“[This bill] is the best we can do to get politics out of education right now,” McMillin said. He said the hope of the bill is to help the IDOE, which Ritz heads, to implement the policy created by the General Assembly.

During her testimony, Ritz said she knew from the beginning of her term that Governor Pence wanted to remove her from chair of the SBOE and goes against the voters who selected her for her position.

“Voters view the election of the Superintendent to be a non-partisan position,” Ritz said. “Look at the voting statistics through history and you will find that the people vote for the person that they feel can best serve Indiana students, regardless of political party. This political power move in HB 1609 and other similar bills is unnecessary and will do nothing to resolve the real governance issues that this policy-making body must address.”

The bill now goes to the House floor for a full vote.