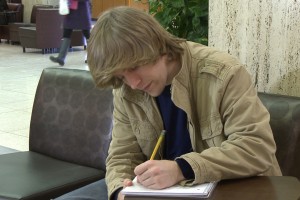 Indiana University student John Obergfell says he’s the first in his family to go away to college, thanks to the 21st Century Scholars Program. His siblings had to live at home while pursing degrees. (Photo Credit: Barbara Harrington/WTIU News)

A scholarship program that helps thousands of Hoosiers attend college each year needs a big boost in funding to meet growing demand.

By some estimates, the 21st Century Scholars Program needs an influx of about $90 million to help those who are in financial need.

Legislators are supportive of the program, but must decide where they’ll get the extra money to pay for larger classes of scholars over the next two years.

“I’d probably be living at home with my parents still,” he says.

Students sign up in junior high and can receive up to full tuition for college if they meet all of the requirements.

“It’s definitely the best thing that’s ever happened to me,” Obergfell says. “I wouldn’t be able to be coming to school here.”

The program is based primarily on financial need – something that’s determined using the Federal Application for Student Aid.

But, students also have to graduate from high school with at least a 2.5 grade point average, complete several planning activities at each grade level, and finish at least 30 credit hours during each year of college. 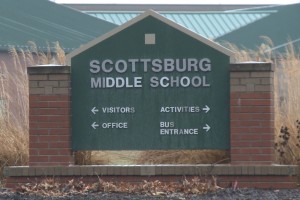 More than half of the 7th and 8th grade students at Scottsburg Middle School are eligible for the 21st Century Scholars program, based on financial need. photo credit: Barbara Harrington/WTIU News

She says more than half of the school’s students are eligible, based solely on their financial need.

“We know a lot of kids, even before they enter middle school, have a mindset whether they think they can handle college or not based on mostly their family experiences,” Naugle says. “Then to have the question of whether I can financially afford it is not an issue if you’re a 21st Century Scholar.”

But, with the demand for the scholarship so high in Scottsburg alone, Naugle’s always worried about how the state will continue funding the program.

“A lot of people would agree that finance alone shouldn’t keep a student from making that decision to go to college or not,” she says. “That said, I always wondered how they were going to fund this. And, it’s so important that we worry in the future that they are going to have to phase the program out.”

Boost In Funding Needs Only Temporary

Legislators don’t want to phase out the program – but they will have to figure out how to deal with a large increase in the number of students using the 21st Century Scholars Program to pay for college over the next two years.

But, the Indiana Commission for Higher Education anticipates that number could jump to 27,000 this year and next.

“The program typically on an annual basis costs around $120 million per year,” says Associate Commissioner Jason Bearce. “This increase, at its peak, will be about $174 million a year.”

That extra cost is the result of two factors that made a larger number of students eligible for the program.

The legislature widened the eligibility pool for a brief period of time – allowing 6th graders to sign up for the scholarship.

And, the national recession caused more families to qualify for assistance.

“This is really something that they had on the horizon for a while that we knew was coming in terms of some really significantly larger class sizes than in prior years,” Bearce says.

But, they don’t know where the money to cover the costs will come from.

“One of the concerns I have is we have other scholarship programs available for other people and, of course, if we have to fulfill the entitlement, it means we’ll be taking it away from the Freedom of Choice awards or the Frank O’Bannon scholarships, which go to other students,” Kenley says.

Legislators passed a bill a couple of years ago that holds students who graduate high school after 2016 to higher standards than previously required.

The hope is that will limit the number of 21st Century Scholars, making the program more sustainable in the future.

“One of the problems that we were having is people were getting the scholarship but they weren’t actually graduating, or finishing college, or meeting the grade requirements,” he says. “And so, we’ve had to ramp that up a little bit and do a little more supervision in terms of making sure people fulfill the terms of the agreement.”

As legislators consider how to fund the scholarship program, John Obergfell is thinking ahead to graduation in a couple of years.

“My dream job that I could have, I’d want to work on a wildlife preserve in Africa or something,” he says.

And, it’s a dream he says would never be realized without 21st Century Scholars.

“Education is probably one of the most important things you can give to a kid, as a society. If you have more educated people, things will get better. Any kid from some rundown neighborhood should be able to go to school, if he wants to.”