The state’s pre-k pilot program for low-income students is underway in four of the five counties selected to host the program. The fifth county will launch in June.

Before the legislature even approved a pilot program last year, early education advocates touted the benefits of preschool, saying classroom time before kindergarten can improve test scores years down the road.

Indiana officials plan to follow students enrolled in the pre-k pilot for the next several years to determine whether those benefits outweigh the cost to the state.

Just a few days in, some families say they’re already seeing improvements in their children’s learning.

‘Where Learning And Social Interaction Meet’

Four-year-old Datayvian Jackson has only been in the pre-k classroom at Day Early Learning Center in Indianapolis for two weeks now, but he’s already practicing writing his name on a white board.

His letters are still a little shaky, which one of his friends points out.

Datayvian is unphased by the criticism, and he keeps working. 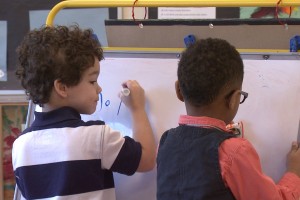 This moment, where learning and social interaction meet, is what Day Early Learning administrator Marsha Hearn-Lindsey says is crucial for kids this age.

“One of the things that I think is very important that we often miss in these opportunities is building the social and emotional competencies of children,” she says. “Really helping children know who they are and be able to work in an environment with other children and I think that’s often the piece we miss when children don’t have these opportunities at an early age.”

Before he enrolled in his pre-k class a few weeks ago, Datayvian was at home with his mom, Sarah Jackson.

Every morning, his older brother and sister would get ready for school, and his mom says that made Datayvian feel left out.

“I think it’s just the idea of this is something my brother and sister get to do, and I’ve never done it and I want to do it,” Sarah says.

Jackson says her son definitely wanted to go to school, but he also needed to.

“He needs to be challenged a little bit more,” she says. “I had a bunch of the workbooks at home — like we can do letters — and he lost interest in that real quick because, ‘Well, I already know how to write my letters’.”

But preschool wasn’t really an option for the Jacksons last year because they rely on one income — from Sarah’s husband.

“It’s kind of sad that to get your child the education you need, it’s so out of reach for some people,” Sarah says.

As soon as Sarah and her husband heard about the state’s pre-k program for low-income families, they applied, then waited to see if they would make the cut for one of the 465 spots in the state.

More than 1,200 families applied, and then the news came.

“I think I cried a little, and we jumped around the house. We all took turns jumping on the bed, actually, because he was so excited,” she says.

“Studies are very clear that the children who start kindergarten well prepared are set for a much greater chance of academic achievement, including third grade reading level, graduation from high school and completion of college,” Brizzi says.

And, so far, Datyvian is doing well.

Jackson says she’s already seeing a difference. She says before starting school, Datayvian always had trouble remembering his birthday and how old he was.

“But he came home yesterday and got in the car and he said, ‘Mommy, my birthday is March 8, 2010,’ and I said, ‘Oh, good job,’ and I don’t know what they did to make it stick in his head because we couldn’t get it to stick,” she says.

While pre-k advocates are excited about these little victories, they also point out that the pilot program is only serving a fraction of the state’s low-income children. 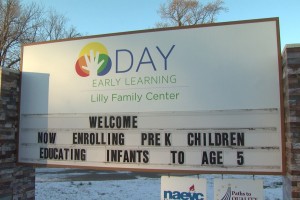 After an overwhelming response to the state’s pre-k pilot program, legislators will consider expanding the pilot.

Back at Day Early Learning, Hearn-Lindsey says there’s a lot more to do.

“I really am hoping that, at some point, we can understand that even our working poor and our middle income families are struggling to pay the cost for pre-k and preschool experiences and figure out a way we can deepen and widen our support for them,” she says.

The legislature will consider a bill this session that would extend the pilot to 13 other counties that applied for the program but were not selected.