Unlike many of his predecessors before him, President Barack Obama has let his hand show in the weeks leading to his seventh State of the Union address Tuesday night – so, we’re confident we can fill you in on some of what to expect. 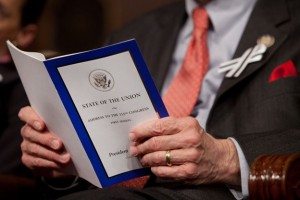 Education issues certainly took center stage in Governor Mike Pence’s annual State of the State address last week. President Obama has said he will lay out details on a few major school-related initiatives, but the topic will be one of many receiving air-time.

This year, the commander in chief tried something new, laying out some of the policies he intends to introduce in his annual address ahead of time, during trips across the country.

That’s why, a few weeks ago, he traveled to Tennessee with Vice President Joe Biden to announce what he called one of the most important proposal he’ll make Tuesday night: a new initiative aimed at making community college tuition free. We’ve already explained this idea in-depth, but here’s a basic rundown:

It’s expected the president will unveil further logistics for the plan in his speech.

Political pundits also expect the president to expand upon an idea he discussed last week calling on the federal government to do more to prevent cyber attacks. This comes after a massive breach of security perpetrated by North Korea late last year. Obama says he wants to protect personal data – specifically related to schools, he wants Congress to consider passing a law based on one that exists in California to prevent software companies from selling student data.

There is no indication that the president will talk about the topic that appears to be consuming his Secretary of Education, Arne Duncan – a potential repeal and rewrite of the federal No Child Left Behind law.

In a post on the White House blog, senior advisor Dan Pfeiffer put out these and a few other “SOTU Spoilers” ahead of the president’s speech. He adds:

There’s a lot more to do. And I can promise you that in the eight years I have worked for President Obama, I have never seen him more fired up about the road ahead.

The president gives his address in front of Congress Tuesday night, beginning at 9 p.m. EST.