Paying for school is a big issue this legislative session. With proposed tweaks to the school funding formula, vouchers, and charter schools taking center stage in multiple budget proposals, among others, it is likely Hoosier schools could see different dollar amounts coming from the statehouse.

Districts could also see a shift in how they supplement that state funding.

A bill facing lawmakers this session could change the rules about when school corporations can propose referendum tax levies to support their general or capital projects funds.

The proposal, written by House Majority Whip David Frizzell, R-Indianapolis, suggests requiring school referenda only appear on the ballot during general elections. Right now, they can come up in May or November. 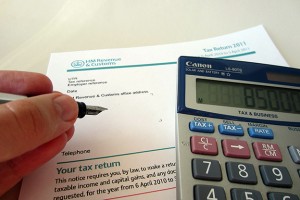 With the implementation of property tax caps in 2008, districts have increasingly turned to referenda to finance school projects. (Photo Credit: 401(K) 2012/Flickr)

Over the last five years or so, Hoosiers may have heard the word “referendum” more than they ever had before. In particular, school districts have been asking voters to consider raising their own property taxes more often.

Ever since lawmakers implemented property tax caps in 2008, the portion of tax money that could be distributed to school corporations has shrunk, causing this change in the way Indiana funds its public schools. Now, when a district experiences a revenue shortfall, it has become more common to pursue financing through a referendum.

And, more and more, not only are districts asking for the money, but voters are agreeing to it. In May 2014, nine out of 10 school-related referenda passed. In the last six election cycles, voters have only approved only about half of the 104 school referenda put forth.

According to research, timing makes a difference in whether or not a measure passes. In fact, StateImpact‘s favorite referenda expert, Purdue University economics professor Larry DeBoer, says in many cases timing is everything.

DeBoer says the type of voter who comes out in May versus general elections in November often makes or breaks a referendum:

So, if this new law is passed to only allow referenda in November, we may see the margin of items that pass get even smaller.

This was thought to have been an issue in the past. Pre-k advocates in Bartholomew County blamed the failure of their first referenda attempt in part on the lack of specific language tacked onto their proposal to explain how the additional tax money would be used.

Legislators already passed a law to remedy this in 2012.